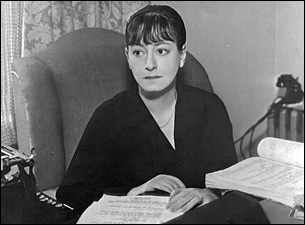 Dorothy Parker was born to J. Henry and Elizabeth Rothschild on Aug. 22, 1893, at their summer home in West End, New Jersey. The family cottage was on Ocean Avenue; it burned down before World War I. Dorothy’s mother died in West End when she was four years old.

Growing up on Manhattan’s Upper West Side, her childhood was an unhappy one. Both her mother and step-mother died when she was young; her uncle, Martin Rothschild, went down on the Titanic in 1912; and her father died the following year. Young Dorothy attended a Catholic grammar school, then a finishing school in Morristown, NJ. Her formal education abruptly ended when she was 14.

In 1914, Dorothy sold her first poem to Vanity Fair. At age 22, she took an editorial job at Vogue. She continued to write poems for newspapers and magazines, and in 1917 she joined Vanity Fair, taking over for P.G. Wodehouse as drama critic. At the time she was the first female critic on Broadway. That same year she married a stockbroker, Edwin P. Parker. But the marriage was tempestuous, and the couple divorced in 1928.

In 1919, Parker became a founding member of the Algonquin Round Table, an informal gathering of writers who lunched at the Algonquin Hotel. The “Vicious Circle” included Alexander Woollcott, Robert Benchley, Harpo Marx, George S. Kaufman, Harold Ross, and Edna Ferber, and was known for its scathing wit and intellectual commentary. In 1922, Parker published her first short story, “Such a Pretty Little Picture,” for Smart Set.

When The New Yorker debuted in 1925, Parker was listed on the faux editorial board. Over the years, she contributed poetry, fiction and book reviews as the “Constant Reader.” Parker’s first collection of poetry, Enough Rope, was published in 1926, and was a bestseller. Her two subsequent collections were Sunset Gun in 1928 and Death and Taxes in 1931. Her collected fiction came out in 1930 as Laments for the Living.

During the 1920s, Parker traveled to Europe several times. She befriended Ernest Hemingway, F. Scott Fitzgerald, socialites Gerald and Sara Murphy, and contributed articles to The New Yorker and Life. While her work was successful and she was well-regarded for her wit and conversational abilities, she suffered from depression and alcoholism and attempted suicide.

In 1929, she won the O. Henry Award for her autobiographical short story “Big Blonde.” She produced short fiction in the early 1930s, and also began writing drama reviews for The New Yorker. In 1934, Parker married actor-writer Alan Campbell in New Mexico; the couple relocated to Los Angeles and became a highly paid screenwriting team. They labored for MGM and Paramount on mostly forgettable features, the highlight being an Academy Award nomination for A Star Is Born in 1937. They divorced in 1947, and remarried in 1950.

Parker was inducted into the American Academy of Arts and Letters in 1959 and was a visiting professor at California State College in Los Angeles in 1963. That same year, her husband died of an overdose. In 1964 she returned to Manhattan and lived in the the Volney Hotel on East 74th Street. In 1966 she gave a radio interview to Richard Lamparski for WBAI.

On June 6, 1967, Parker was found dead of heart disease in her apartment. She age 73. A firm believer in civil rights, she bequeathed her literary estate to Dr. Martin Luther King, Jr. Upon his assassination some months later, the estate was turned over to the NAACP.

Her ashes are interred in a memorial garden at the NAACP headquarters in Baltimore, Maryland, from 1988-2020. In August 2020 the urn with Parker’s cremains was returned to her family and interred in the family plot in Woodlawn Cemetery, The Bronx, on her birthday. In 2021 Parker’s gravestone was installed and unveiled, in the Myrtle section. Parker is buried next to her parents.