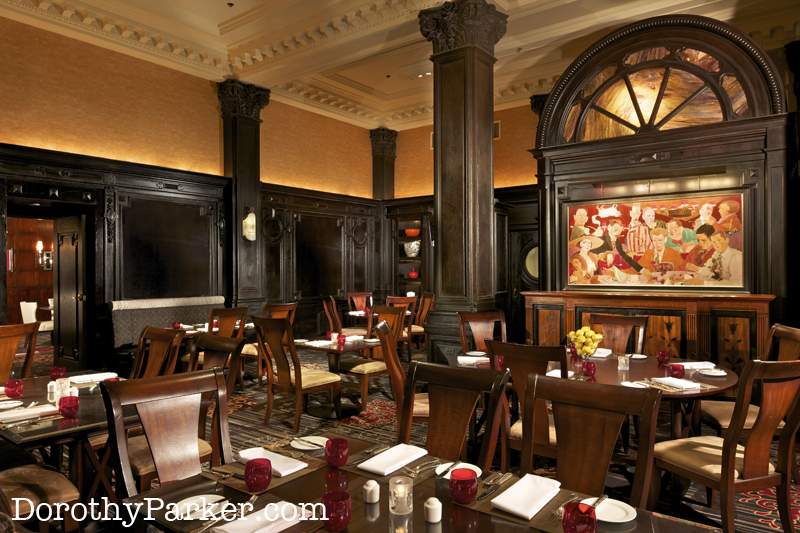 This is a mix of places that Dorothy Parker visited, combined with others that she probably had contact with. Living in New York, she soaked up the surroundings and put them on the pages of her work. Many of these locations crop up in her writing. Other are central to her life and times.

The Algonquin Hotel, Dorothy had a furnished room here, and could pop down in the elevator to meet her pals at the Round Table

Speakeasies, where Dorothy and chums were frequently in their cups

“21″ Club, nights of the high life at the famous saloon

Polly Adler’s, Dorothy and Mr. Benchley hung out together at this infamous brothel

Girlhood Walk, the Soldiers’ and Sailors’ Monument, located at 89th Street and Riverside Drive, is where Dorothy walked her dogs

The Waldorf Astoria, hotel where Mrs. Parker and her friends took part in a strike

The Cort Theatre, legendary Broadway playhouse where Dorothy sat through shows as a critic

Dash and Lilly, meeting the famous couple at the old Sutton Hotel

World War II Woe, hotel where Dorothy had a few too many in 1944

The Plaza, Vanity Fair career ended over tea and scones here in 1920
Central Park, you can’t be a Parker fan and not love reading here

Animal Lover, Dorothy was nuts about animals, meet her friends

The Ansonia, gorgeous apartment house on the Upper West Side

The Dakota, one of the most famous addresses in New York City

Former Hotel Endicott, a non-descript apartment house in her neighborhood

Raton, New Mexico, the ride to legally wed across the border

Dorothy Parker Memorial Garden, at the headquarters of the NAACP in Baltimore. Her ashes are interred here