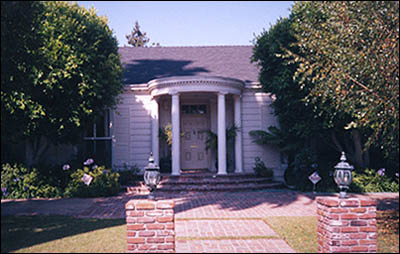 When the Algonquin Round Table quit meeting for lunch in 1929, it was the beginning of great changes in Dorothy Parker’s personal and professional life. She met and married her second husband, Alan Campbell, in 1933. A bit-part actor, who was 11 years Dottie’s junior, the couple moved to Los Angeles during Hollywood’s Golden Age.

They became a screenplay writing team for the big studios, slaving away on mostly forgettable pictures for big bucks but little satisfaction. Parker would continue to write the occasional short story during the next 30 years in Los Angeles, but her verse and poetry all but stopped.

In Los Angeles, Mrs. Parker became active in progressive political groups. She helped form the sceenwriters union that is now the Writers Guild; there is a painting of her in the union headquarters. But she loathed the work, she truly hated sceenwriting, as she wrote:

When I dwelt in the East I had my opinion of writing for the screen. I regarded it with a sort of benevolent contempt, as one looks at the raggedy printing of a backward six-year-old. I thought it had just that much relationship to literature.

Well, I found out, and I found out hard, and found out forever. Through the sweat and the tears I shed over my first script, I saw a great truth – one of those eternal, universal truths that serve to make you feel much worse than you did when you started. And that is that no writer, whether he writes from love or from money, can condescend to what he writes. What makes it harder in screenwriting is the money he gets.

You see, it brings out the uncomfortable little thing called conscience. You aren’t writing for the love of it or the art of it or whatever; you are doing a chore assigned to you by your employer and whether or not he might fire you if you did it slackly makes no matter. You’ve got yourself to face, and you have to live with yourself.

She would live in Los Angeles–off and on–from 1934 to the early 1960s. Mrs. Parker shuttled between New York and Pennsylvania, where she and Alan had a country house for thirteen years. After Alan’s death in June 1963 in the couple’s West Hollywood house, Mrs. Parker returned to Manhattan for good.

Very special thanks to California Dorothy Parker fans Kurt VanderSluis, Helen K. Garber, and Mark Lopez for all L.A. photos. These have their own stories. Kurt reports: “I got thrown out of Chateau Marmont (ever so politely) for taking these pictures. The nice British lady who was the manager told me that guests get very nervous when they see people with cameras.”