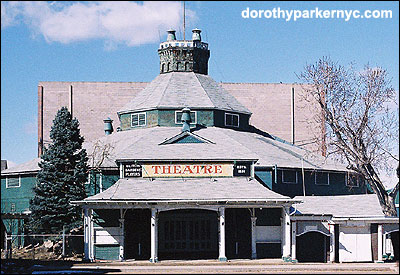 A thin strand of history connects Denver’s gem of an old theater to Dorothy Parker, but these are the things that make up trivia books (and web sites), aren’t they?

When researching the brief time that Mrs. Parker and Alan Campbell spent living in Denver in 1934, the place that drew the couple to the Mile High City from Manhattan’s East Side was the Elitch Gardens Theatre, located at West 38th Avenue and Tennyson Street, on a square of land in northwest Denver.

Alan, a second-rate actor who literally was taking his act on the road, dragged Mrs. Parker, his then-girlfriend, to Denver. Elitch Gardens is the oldest summer stock theater in the nation, and Alan had landed some parts.

While Mrs. Parker whiled away the hours in her garden or working away on short stories at their Mead Street rental, Alan was either in rehearsal or onstage. Sometimes Mrs. Parker, knitting bag on her lap, would sit in the dark and catch the show. She was a long way from The Cort, but she told friends she was happy in Denver.

Thanks to researcher Leslie Gannon, digging in the Colorado Historical Society library, the credits for Alan have been uncovered:

Saturday, June 23, 1934
No More Ladies by A.E. Thomas, A comedy in Three Acts
James Salston: played by Alan Campbell
This program has a “Who’s in the Cast” credit on page 8, A.C. was listed as: Alan Campbell in addition to writing for The New Yorker, Saturday Evening Post, and Vanity Fair, was with Noel Coward in Design for Living and was the lead for ten weeks in An American Tragedy.

Sunday, July 15, 1934
Men in White the Pulitzer Prize Play by Sidney Kingsley
Dr. Levine: played by Alan Campbell
Local celebrity/philanthropist appearance by Helen Bonfils who played Mrs. D’Andrea. Denver’s Helen Bonfils Theatre Complex was named after her. She built and financed the Bonfils/Lowenstein Theatre. She also helped establish a blood bank in Colorado in the 1940s, which was originally named after her mother, but is now known as the Bonfils Blood Center.

Sunday, July 22, 1934
Come What May by Richard F. Flournoy
Fred Hayward (as a young man): played by Alan Campbell

Sunday, August 19 (sic), 1934
(Actual performance week was August 12, 1934 per handwritten note on one of the tear sheets.)
The Return of Peter Grimm by David Belasco
Frederick, Peter’s Nephew: played by Alan Campbell

Sunday, August 19, 1934
The Wind and the Rain by Merton Hodge
Gilbert Raymond: played by Alan Campbell

Elitch Gardens was highly regarded in American drama. Some of the actors of note who performed there were Sarah Bernhardt, Grace Kelly, Edward G. Robinson, Vincent Price, and William Shatner. It was best known for the productions in its picturesque, octagonal structure with a two-story porch.

The 1890 theatre closed in 1991. The theater made news for a needed renovation. In December 2002, the city of Denver announced a $15 million campaign was underway to restore it. It was expected to reopen in 2005, with about 800 seats and year-round occupancy.

In December 2002, the Historic Elitch Gardens Theatre Foundation formally launched a $14 million fund-raising campaign. According to Rocky Mountain News reporter Lisa Bornstein, the foundation already had raised $2.7 million of that amount, including a $200,000 matching grant from the Gurtler family, which owned and operated Elitch Gardens for 82 years. Additional funds were raised for phase two, which was code compliance in 2014, to obtain one time event permits. With those event permits the theater was opened to the public for the first time in fourteen years. The new Highlands Garden Village development is where the theater is located and it will also have a restored carousel and community center.

Exploring this part of Denver is a good idea. According to Leslie Gannon, who took the photos for this page, “I guess something you should know about Northwest Denver is that it is very diverse,” she said. “Its history includes and continues to be an amalgam. You know Mexican, German, Irish, Italian, old, young, Catholics, Hasidic Jews, gays/lesbians, lower income and upwardly mobile.”

“Also,” Leslie said, “I found out recently that at one time there was a recovery house for persons who had a sex-change operation down in Trinidad, where they could re-introduce themselves to society in their new identity. Just remember that White/Protestants lived in southeast Denver Proper (I-25 being the dividing line) and everyone else “at one time or the other” lived in northwest Denver. Which is probably one of the reasons (besides it being walking distance to the theatre) that Parker et al chose to live in the house they did while here.”

An interesting chapter of Mrs. Parker’s amazing life is tucked away in one of the best cities in the country.