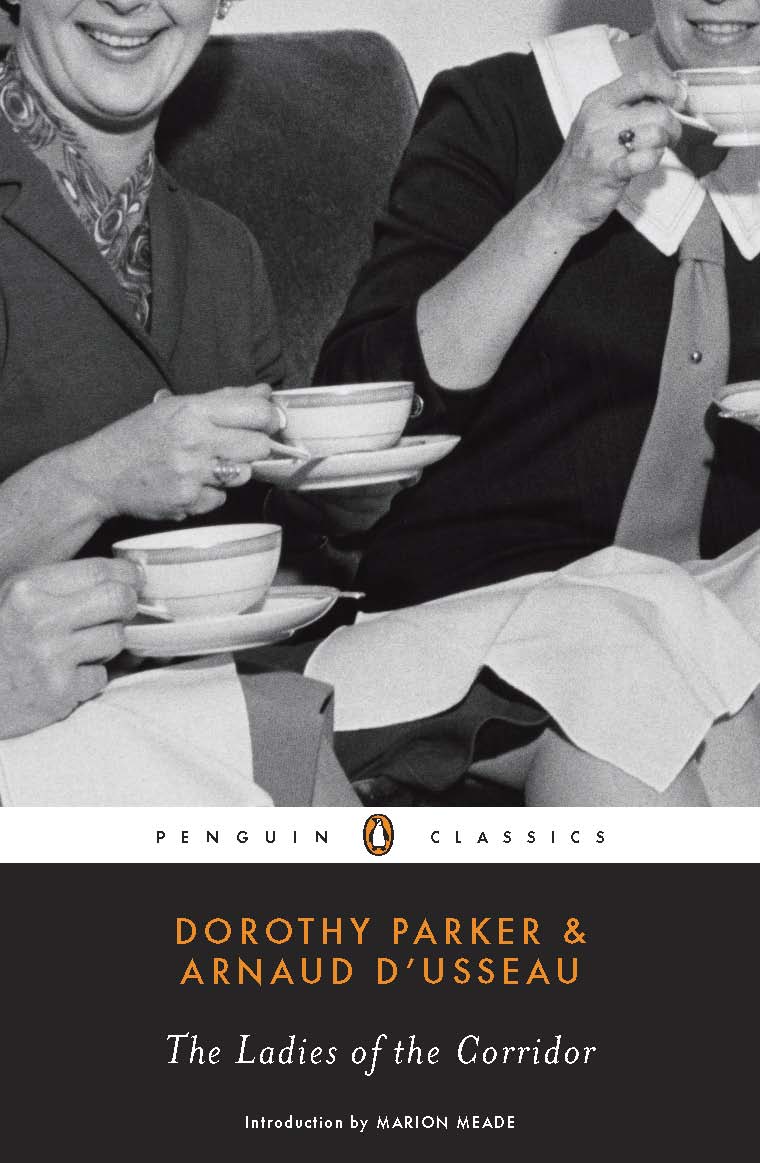 The last major project that Dorothy Parker undertook late in her life was The Ladies of the Corridor, a drama that had a brief run of just 45 performances on Broadway in the fall of 1953. The book of the play has been out of print for more than 50 years, so in May 2008 Penguin Classics brought out a new edition. Since the original book has been populating bookcases in homes, its nice that a new edition is able to make its way into the hands of new fans and admirers of Dorothy Parker. The book has an introduction by Marion Meade, Parker’s biographer and editor of The Portable Dorothy Parker.

“It’s the best play she wrote, but most of the plays she wrote were pretty bad,” Meade says in an interview. “It was the last thing she wrote of any note. I think she was ahead of her time in addressing this subject at all. She always used to say, “Well, I’m a feminist, I’m a feminist,” but she didn’t act like a feminist, that’s for sure. But in this play she proved, in fact, she was a feminist.”

Parker had a few collaborators in her long career. Her first was Franklin P. Adams, her close friend. They jointly published a book of light verse called Men I’m Not Married To/Women I’m Not Married To. On stage and screen she also had collaborators: Elmer Rice on the 1924 Broadway play Close Harmony (which did even less business than Ladies) and her second husband, Alan Campbell, with whom she wrote with in Hollywood. Their most successful collaboration was on the screenplay for A Star Is Born in 1937; the couple was nominated for an Oscar.

On The Ladies of the Corridor her co-writer was Arnaud d’Usseau, a playwright and screenwriter who was almost 30 years younger than the former member of the Algonquin Round Table. Parker took a shine to him in an elevator in the Chateau Marmont after World War II, not long after she and Campbell divorced. D’Usseau had show business in his blood; his father, Leon d’Usseau, was an early Hollywood screenwriter and director when movies were silent. He was also politically active, and like Parker, was a Communist. When Parker met him, the 33-year-old was working on “B” pictures like Lady Scarface.

The play came together in 1952 and 1953 while Parker was living in a series of rented rooms in Manhattan. The collaboration came easily to them, which d’Usseau recalled in a 1989 interview.

“I told her an idea I tried out on Jimmy Gallo, which he didn’t pick up on,” d’Usseau said. “It was what happens to the women in America whose husbands die when they are in their late forties and fifties, and they are left alone for another 20 years… I looked around the neighborhood and began to realize that there were a whole group of women having dinner at 5 o’clock at Schraft’s, and were coming out of the bars drunk, all beautifully and elegantly dressed. All totally unhappy because of the loneliness. Of course Dorothy picked up on it right away.”

The play had a rocky run in 1953, but it did get some good notices. It was short-listed as among the best by a critics group, and no less a fan than John Steibeck was in the audience. He wrote in 1966: “Dorothy Parker wrote a wonderful play about these women — a heartbreaking play. I see them in New York, in the delicatessens buying a quarter pound of sausage, a small dab of cheese, a miniscule plate of potato salad for their suppers. But luncheon seems to be the widow’s meal, and they congregate in restaurants…”

The play reads like a time capsule of the Eisenhower years, and you can just picture the fins on the Cadillac’s, nuclear bomb tests in Nevada, Senator Joseph McCarthy’s witch-hunt, and the Cold War headlines. It was not a great time in American history, and for Parker and d’Usseau, they zero in on a painful part of society: the lonely women who are left alone after their husbands die or divorce them. The play is a drama, but it also has its lighter moments. Parker comes through time and again with clever lines and trenchant dialogue. For Broadway buffs and scholars, who wrote what parts is open to debate. D’Usseau claims it was a joint partnership. But most will see a little bit of Parker in each character’s story.

The play is not light, nor fun. It can be looked at as a period piece, Meade says.

“I think it’s a very well-made play,” Meade says. “It has a point that is easily accessible. On the other hand it’s like a historical artifact because it shows a picture of women as they were 50 years ago, and the picture is really ugly. Despite her humor and despite everything, it’s an ugly picture (laughs). It’s like a look back at Auschwitz and Dachau (laughs). It’s like saying, “Look, I got out, but look at what happened to all the rest of them.” It is unreal today to think that you could be one of these women. That you could have been a woman in your fifties in the 1950s and this was all that your life was going to be. It is so different from today that you think, “Well that was impossible.” It wasn’t. It was our mother’s generation.”

The Ladies of the Corridor could have been one of Parker’s most overlooked pieces of writing, if not for the good works of the Peccadillo Theatre Company. In September 2005 the company staged a hit off-off Broadway production at the East 13th Street Theater that garnered fantastic reviews and played to full houses for several weeks. In the New York Times, backup critic Honor Moore said, “…it is as unyielding and coruscating a portrait of women before feminism as I have ever seen.” When Parker’s biographer, Meade, saw the play performed, and warmly received, she decided to approach Penguin Classics about bringing it out again, just as the Viking Press had 55 years ago. Her determination got the book to come out for a new generation to read and enjoy.

The play is not the greatest thing Parker ever worked on, but there are parts of it that will take your breath away. It is a nice drama that would be excellent for a community theatre to stage. Plus, with parts for nine actresses (all with juicy lines) a good idea for a company that is stacked with female talent.

The Ladies of the Corridor is on sale now in bookstores everywhere, and online. [Buy via Amazon]

1989 Interview with playwright Arnaud d’Usseau about The Ladies of the Corridor.

2008 interview with biographer Marion Meade of The Ladies of the Corridor by Penguin Classics.