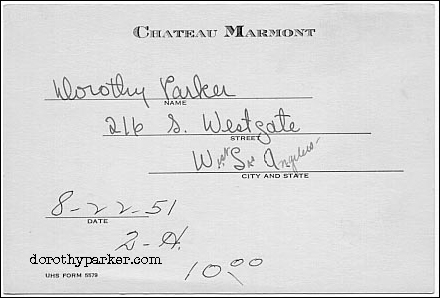 There are many letters, books, and other ephemera sold with Dorothy Parker’s signature affixed. In an effort to help weed out what is real and what is not, here is a sample of what are genuine, and not genuine, Dorothy Parker signatures.


Signature from letter used by U.S. Postal Service when it dedicated a postage stamp for Mrs. Parker in 1992.

Not the same Dorothy Parker

Don’t fall for a fake

There are many fake letters attributed to the late literary forger Lee Israel (author of Can You Ever Forgive Me) creations. Israel faked letters from many famous writers (including Noël Coward, Eugene O’Neill, Lillian Hellman) and her Dorothy Parker fakes were always from the Norma Place address in West Hollywood. This also doesn’t look at all like her signature. Unfortunately these fakes are still in circulation, and this particular letter (in 2016) is hanging in the Dorothy Parker Suite of the Algonquin Hotel. The fakes look and sound authentic. Two of them were so good they got by Barry Day, and he put them in a collection of Coward letters. And a fake got past Marion Meade and is included in the most recent edition of The Portable Dorothy Parker. Beware.