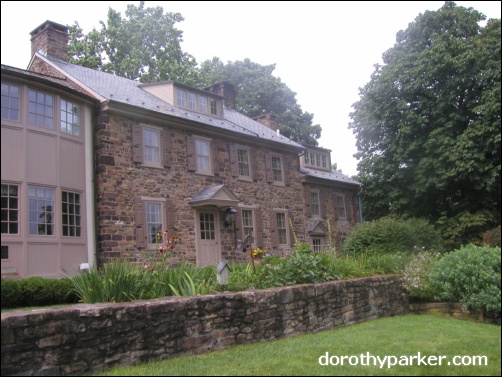 Dorothy Parker’s name is synonymous with Manhattan and the high life of posh parties and smoky speakeasies. But for 20 years she was a part-time resident of a sleepy village in Eastern Pennsylvania when she took refuge from New York and Los Angeles during the Depression and World War II.

Dottie and her second husband, Alan Campbell, bought a country farmhouse with money they made as a screenwriting team in Los Angeles during the Golden Age of movies. In the summer of 1936, Dorothy and Alan visited Bucks County, located about three hours from New York and one hour from Philadelphia. Dottie wanted to plant “roots” according to biographer Marion Meade. Friends were already buying homes in the area, and Dottie and Alan were eager to join them.

The couple bought a 14-room Pennsylvania Dutch farmhouse on 120 acres in Pipersville, Pa. Named Fox House; it had an apple orchard, a barn, and a view of the Delaware River. It was a steal at $4,500. The original section of the home dates to about 1750; it was owned by the Fox family and their name is still on a piece of the woodwork that was retained in the kitchen area. The center part of the home dates to 1841 and it was remodeled when Dottie and Alan bought it; they added electricity and indoor plumbing. The owners in the 1990s added a large, cozy addition to the house. Today the house is on 20 acres.

Dottie and Alan sunk tens of thousands of dollars into the house, and used the country residence for entertaining their New York and Hollywood friends. Dottie, who was in her early 40s when she bought the place, turned to gardening and shopping in Bucks County. Some say she attended movies at the theatre in nearby Doylestown. The writing in her country residence was done on the patio, nearby the pool. A statue of Bacchus, god of wine, sits in the garden, a gift from Alan to his wife.

Dottie and Alan also are said to have stayed at the Doylestown Inn while their farmhouse was being renovated. One account says they frequented the Water Wheel Tavern.

These photos of Dorothy Parker’s house in Bucks County, Pennsylvania, were taken at a private house tour in the summer of 2006 when the house was on the market.

The highlight was meeting Helen Beer, who used to live on the property as a child. Her parents were Dorothy and Alan’s caretakers. She gave us great insight into life in the 1930s on the farm. Later, at the Algonquin Hotel, she told us more stories.

These photos are of the home, front and back, as well as the property. The bedroom with the two twin beds is where Dorothy Parker slept (not on those beds, however). The house was modified and expanded in the 1990s; but the original parts of the home from the 18th and 19th Century are mostly intact. The glass decanter in the final photo once belonged to Mrs. Parker, she gave it to the Beer family, her caretakers.

Special thanks to Dee Dee Bowman of Coldwell Banker Hearthside Realtors (New Hope, PA) for her kindness in getting the Dorothy Parker Society access to the house; and to the gracious owners to allow us to troop inside (and have a cocktail party on their porch). The home is now back in private hands, and is not open to the public.

Getting there: The house is outside Pipersville. The house is a private residence on a private road, and is not open to the public. It cannot be seen from the road. For privacy reasons, we will not post the address online. Sorry.