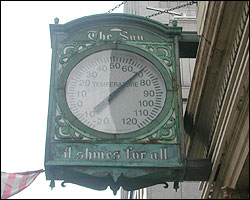 When the 1930s began Dorothy Parker was down on her luck. She wasn’t getting a lot of work done, she was drinking heavily, and she was letting herself go. This was in the period before she met her second husband, Alan Campbell.

Along comes a young guy named John McClain. Biographies portray him as a real rake, or worse. He and Mrs. Parker became an item, and they both got what they wanted: she got a boyfriend; he became a boldface name by being on her arm. If you know “Ballade at Thirty-Five” then you can appreciate what state she was in.

When McClain met Mrs. Parker in 1931 he was a clerk in a brokerage house on Wall Street. He was a good-looking former football player at Brown, 27, while Mrs. Parker was 38. She liked the attention he gave her.

Mrs. Parker spoke to a friend at the New York Sun, who procured a reporter’s job for McClain, assigned to write the shipping news. He worked in the Sun Building, on the northeast corner of Broadway and Chambers Street. He eventually wrote a column called The Sun Deck.

Accounts recall McClain as being the worst possible boyfriend for Mrs. Parker. He used her, got into the society pages, and tossed her aside. She frequently telephoned him many times throughout the day and night. McClain, a frequent visitor to her room at the Algonquin, broke her heart. Mrs. Parker made another suicide attempt.

McClain’s office at the Sun was across the street from city hall. Mrs. Parker had friends at all the New York City newspapers at the time, so it’s quite possible she visited McClain’s office to call on him.

The Sun has a rich past in New York history. Founded in 1833 by printer Benjamin H. Day, it’s in the journalism history books for its legendary editor, Charles A. Dana. Probably the most famous letter-to-the-editor ever came across the desk at the Sun, when editorial writer Francis P. Church replied to an 8-year-old living at 115 West 95th Street, writing, “Yes, Virginia, there is a Santa Claus.”

The Sun took up residence in 1916 on Broadway and Chambers, and installed two giant clocks on the exterior. They are still out there, one with the time and the other the temperature, but don’t trust them. The last issue of The Sun was published on Jan. 4, 1950, when it closed due to dire financial difficulties, ending a 116-year run.

The New York Sun rose again (sorry) on April 16, 2002. A broadsheet, it was an excellent example of what a metropolitan paper should be. It had the corner on covering New York happenings with a twist. It was engaging, informative, and entertaining. It was published by Ronald Weintraub and edited by Seth Lipsky, and ceased publication on September 30, 2008.