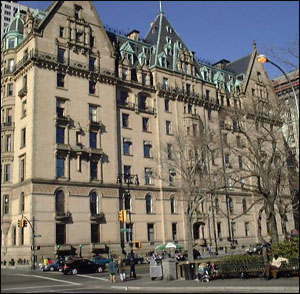 After living on the same block as The Dakota for thirteen years, I had a take-it-or-leave it attitude with the landmark on Central Park West. It was an amazing landmark to share a block with.

In her era, Dorothy’s friends Edna Ferber and George S. Kaufman resided across the street from The Dakota, in the earlier incarnation of the Hotel Majestic. As a girl, she lived on the street as the building.

The Dakota is on the corner of 72nd and Central Park West, Dorothy lived a few blocks away for years. Lauren Bacall (who recorded Parker audio books in the 1980s) and Boris Karloff used to be tenants. It is indeed the place where Rosemary’s Baby was filmed and John Lennon gunned down, and not a day goes by that I don’t see a damn tourist taking a photo of the pavement. Yoko Ono still lives here.

The Dakota was built in 1884 by Henry Hardenbergh, when living on the West Side was seen as not as fashionable as the East Side. Dorothy lived for years in the neighborhood, and it is part of Dot City because it’s the kind of address some her friends may have had. Reading “You Were Perfectly Fine” (1929) about a night of boozing, one can see it set in a giant old apartment in the Dakota. It is kind of an outrageous looking building, with its green and brown peaked roofs.

A Parker connection: Judy Garland used to live here. Parker was the Oscar-nominated screenwriter for A Star is Born (1937) and Garland was in the first remake (1954).