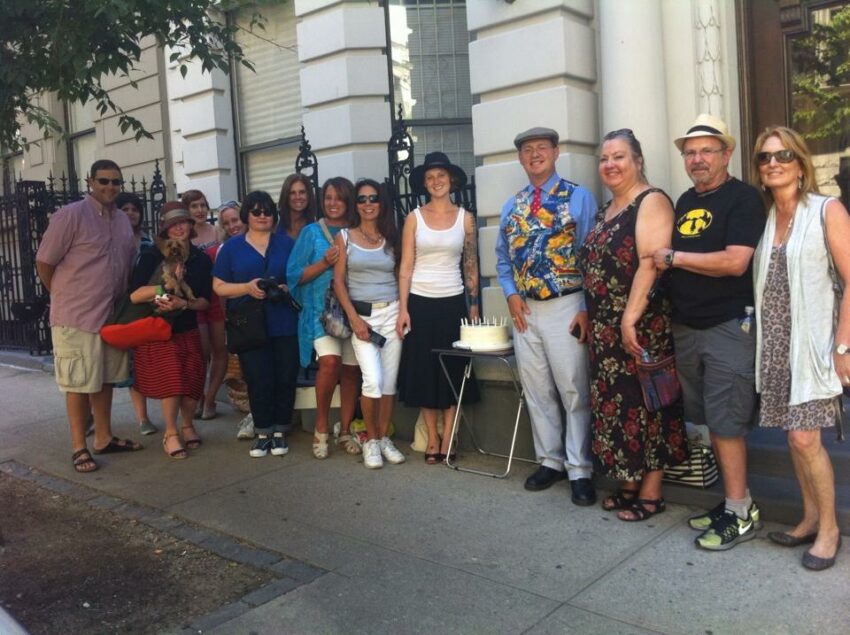 The upcoming 2021 Parkerfest has given me the opportunity to look back at the events that the Dorothy Parker Society has held in the past, starting in 1999. After few hours of looking at old photos in the archives–people with cigarettes in hand indoors–and reviewing the “recaps” of past Parkerfest soirees–yes we chartered a yacht twice–it brings back nothing but good memories. Unfortunately we did not have the 20th annual Parkerfest last year, so we are one year off. We will fix that this year with the grandest Parkerfest that’s ever been held: Unveiling the new gravestone for Dorothy Parker exactly a year after she was reburied next to her parents.
Parkerfest started in August 1999, a little less than 12 months after the site that became dorothyparker.com was launched. Friends asked for a walking tour, we ended up at the Algonquin and Flute, and we’ve been holding parties ever since. One of the things I forgot was that one of many reporters to attend and write about us was this one in 2005, from the Observer in London. He said “I was still frightened by the whole ‘fan’ thing. I collected her first editions, had flown across the Atlantic just to be at the party and, well, tried to buy her dress, but I was not obsessive, obviously. How would I deal with the über-fan, who knew more about her underwear habits than was strictly healthy? You had to approach these people warily.”

In looking back, most Parkerfests always tried new things, but they always have had cocktails and Dorothy Parker’s words in common. From the very first 1999 Parkerfest with Amy reading Parker poems in Central Park, to 2010 when we held a staged reading of the 1924 Parker-Elmer Rice play Close Harmony, and 2017 when Maureen Van Trease staged her play Those Whistling Lads. When the New York Distilling Company opened ten years ago we began having parties there and visiting The Shanty, the cozy drinking establishment attached to the distilling operation. Who doesn’t like standing on a gin barrel and reading poems off your iPhone?

Following the hit debut Parkerfest, the die was cast. In 2000, when we feared the Millennium, we held our first luncheon at the Round Table. We also took over the Oak Room for songs and a performance, and returned to Flute for a speakeasy party. The following year we held our third Parkerfest less than a month before the 9/11 attacks, when New York City seemed so different. At the Algonquin we chatted with Stu Silverstein, editor of Not Much Fun: The Lost Poems of Dorothy Parker. In addition to the walking tour and speakeasy party, we welcomed Dorothy Parker’s family to their first Parkerfest. Susan, Nancy, and Joan, are Mrs. Parker’s grandnieces, and over the years since they have continued to visit and share cherished memories. It all started here. In 2002 we held another swanky party and a walking tour to celebrate Mrs. Parker’s birthday.

The fifth annual Parkerfest was looking to be similar to year’s past, but we welcomed a large contingent from out of town who added so much sparkle: the nascent Robert Benchley Society. President David Trumbull brought a big crowd, and that made the speakeasy night and trips to the Algonquin Hotel and walking tour so much better. We had a ball with these folks!


In 2004 two big changes occurred: we moved Parkerfest to October and chartered a yacht. Having a floating party was nice. Live jazz, everyone attired so well, an open bar. However, not providing food was a big mistake. We had to be poured off that boat. It was a raucous time and seeing the Statue of Liberty at night was memorable.

What happened the next year at the seventh annual Parkerfest was one of the high-water marks for the events. Also held in October, the 2005 party also had us back aboard The Diplomat for a speakeasy cruise (still no food served). But we also had a crazy schedule of Parker-theme performances that we have not matched since: “You Might As Well Live” starring Karen Mason was part of the New York Musical Theatre Festival. Cindy Ball performed her Helen Kane show at Don’t Tell Mama. But the big news this year is that singer-actress Sara Jangfeldt jetted over from her native Sweden–with her jazz band–and performed in the Oak Room a powerful adaptation of Parker poems to hot jazz. It was a magical weekend.

That was our last boat trip, and ever since Parkerfest has returned to what we do best: Speakeasies and poetry. In 2006 we had a dog walk and burlesque party (in the landmark Woolworth Building). The following year we held a dinner with the Robert Benchley Society at Pete’s Tavern, member Stephanie Sellars co-produced the stage show “The Potable Dorothy Parker” on the Lower East Side, and we ended up at “a sumptuous apartment on Central Park West” with nude models for life drawing classes with none other than Molly Crabapple. Bonus was welcoming Tony Adams, son of original Round Table member Franklin P. Adams.


We started going to Governors Island in 2008, where we went to the Jazz Age Lawn Party (back when it was still free). In 2009 we went back to Governors Island, and had the honor to unveil a plaque in front of the childhood home on West 80th Street, with Champagne, cake, and readings. The plaque is now a local landmark.

We had multiple events in 2010, but the highlight was two shows of Close Harmony. Held at Urban Stages, we had a wonderful cast. Kudos to co-producer and co-star of the staged reading, Bill Zeffiro. The 2012 Parkerfest was a barn burner. It was a double whammy because it was our first joint party with Wits End for a Parkerfest, which brought loads of new faces, but it also was our first to go to the new New York Distilling Company. It was four days of events! We returned to The Shanty in 2013 and in 2014, with multiple poetry readings. Having Dorothy Parker read live is truly magic.

Sixteen years after starting Parkerfest at Flute, in 2015 we went back for a party with Wits End. We held it in July, so everyone was in summer vintage attire, which was swell to see. We also had a walking tour of Parker’s haunts. In 2016 we held Parkerfest on the exact birthday, August 22, so we headed back to Brooklyn for a gin tasting, tour of the distillery, and wonderful reading of Parker poems in front of the barrels where the spirits are distilled. It was a memorable time!

In 2017 we returned to Governors Island for the first time in a few years, but this time not for the lawn party. We had a house to ourselves and Maureen Van Trease presented her show “Those Whistling Lads.” A big bonus was Mrs. Parker’s family returned to New York City to join us. Our 2018 events were fairly low-key, a walking tour and party at The Shanty.

In 2019 the Dorothy Parker Society turned 20 and we did not have a real Parkerfest as in year’s past. We did have some big events to celebrate, such as acquiring Dorothy Parker’s mink. But we had a low-key series of events of walking tours. Unknown at the time was that due to the pandemic would be unable to meet at all in 2020, which is why the 2021 Parkerfest is so special.

In August 2020 Dorothy Parker returned to her hometown from the memorial garden in Baltimore where she had been for more than 30 years. On her birthday there was no Parkerfest, there was just 10 people bringing her home, as he family wished. That is why the 2021 Parkerfest means so much, because it is the first one where Mrs. Parker is back home.