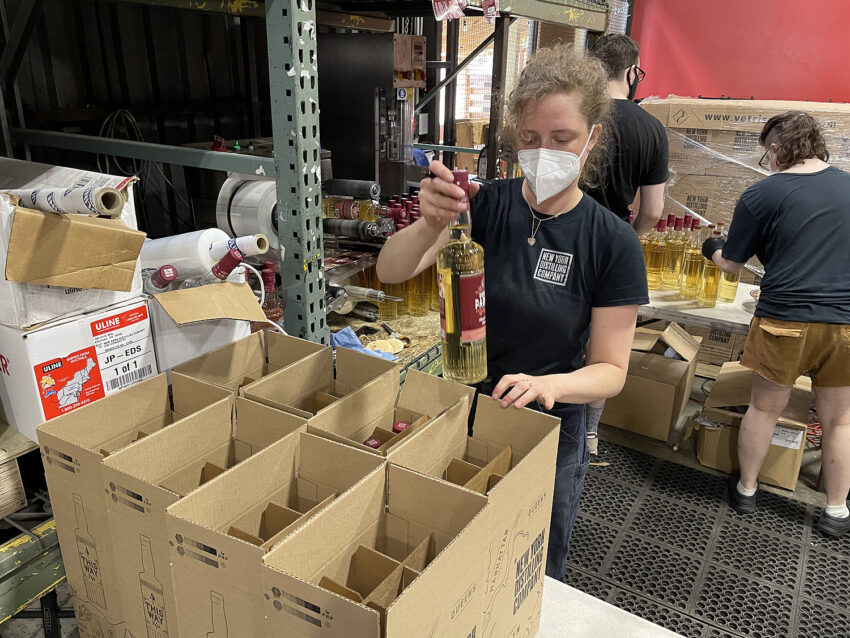 Soon after Dorothy Parker’s cremains were returned to New York City ten months ago, and The New Yorker story was published, many of her fans asked how they could help support a gravestone. It can be announced today that the family of Mrs. Parker will work in partnership with the award-winning New York Distilling Company and the Al Hirschfeld Foundation. They will make available two Dorothy Parker-theme limited edition items; a portion of the proceeds will be donated to the Dorothy Parker Memorial Fund, a new charity established to help preserve Parker’s legacy for all time.

Beginning today, a special batch of Dorothy Parker Round Table Reserve Gin–only 250 limited edition and numbered bottles–will go on sale. You can order them here or else order here to pick up at The Shanty, 79 Richardson St, Brooklyn, NY 11222. This special limited-edition gin, featuring a Hirschfeld art tag, has been created specifically with Dorothy Parker in mind. The now classic gin has been gently rested in sherry barrels used to age Lustau Vermouth from Spain. The soft oak has soaked in all of the vermouth attributes and the finished gin – Dorothy Parker Reserve – imparts lovely hints of rosemary, chamomile, bright melon, and pineapple. A refreshing acidity lends itself to a mixed drink, specifically a great summer Martini but consider a Gimlet as well.

Orders can now be placed for a limited edition Dorothy Parker t-shirt with a drawing by Al Hirschfeld. This is the first time a shirt with Parker’s image by Hirschfeld has been made available. The Al Hirschfeld Foundation is accepting orders now for the special shirt, which will only be available for a short time, to support the gravestone.

I had the opportunity to watch the gin bottling operation at the New York Distilling Company on June 2. The operation was to take gin that was distilled on the site since May and bottle the gin. The process was to fill the bottles, cap them, label the bottles, number them (1-250), place the Hirschfeld tag on the neck, box the bottles six to a case, and then put the cases on a pallet. The bottling operation was four bottles at a time, and the crew worked in unison. Assistant Distiller Hannah Toale had her crew, Beatrix, Kyle, and Nico, wrap it up in under two hours. (However, the hardest worker was Cooper the plott hound, who belongs to Bill Potter, co-founder of the distillery. In the spirit of Dorothy Parker, having a beautiful and friendly dog on scene set the mood for the day).

The gin will go on sale on June 7, which is also the 54th anniversary of Mrs. Parker’s death. The t-shirts can be ordered now for 30 days, and then will be shipped in July. The Dorothy Parker Memorial Fund will accept donations to support the gravestone, to be erected in the Rothschild family plot in the Myrtle Section of Woodlawn Cemetery in The Bronx.

Direct all questions about the project here.

*Donations at this time are not tax-deductible until non-profit status is confirmed with the IRS.