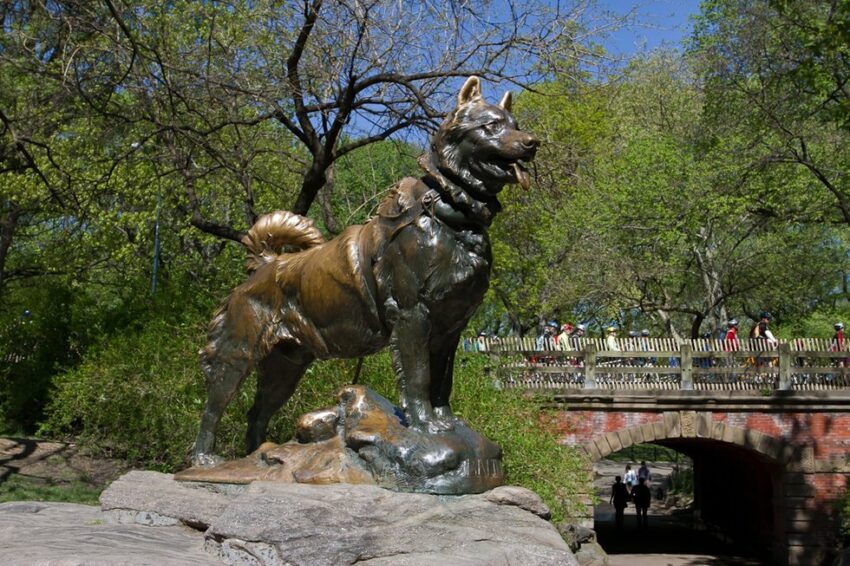 Dorothy Rothschild as a girl walked her beloved dogs in Central Park and Riverside Park, both parks near her Upper West Side homes. But she also was a longtime writer about dogs as an adult. As a kid she and her father exchanged postcards about the health and doings of the family dogs, Rags and Nogi, during her summer vacations in Bellport, Long Island.

In 1925 Parker was one of the most famous women in America. It was the height of the Algonquin Round Table. And who made the newspapers? A dog. Balto, the lead dog in a team that brought an anti-toxin to Nome, Alaska. The dog was brought to New York and put on exhibition. A sculpture of Balto was placed in Central Park. And Parker, who lived a few blocks away, wrote this poem for Life, the humorous weekly magazine (not to be confused with Henry Luce and his LIFE).

BALTO
(The Lead Dog of the Team That Brought Antitoxin to Nome)
By Dorothy Parker, 1925

I think that you could only pity me
Who’d want to weep and stroke your head and coo
And murmur little names, mellifluously,
And know no other thing to do.

What should I do, but drop my eyes, and strain
To cloak the meanness of my offerings,
Who an aggrieved at cold, and hide from pain,
And live with little, little things.

My days slip by in thin and wavering line;
Softened my life to such as sick men lead.
And sharp there cuts across dimmed hours like mine
The cold white radiance of your deed.

Outraging cornered Death, you held the course
Against the whining night, the whirling day.
When man gave over to the inhuman force,
Then it was you who led the way.

Though never trumpet urged you to the fight,
And roystering rush of war was not your part,
Your spirit was a rocket in the night,
You bore a banner in your heart.

Not hope of cited glory led you then,
Simply, so went your days since they began.
You did the thing, not thought of it again,
A very gallant gentleman.