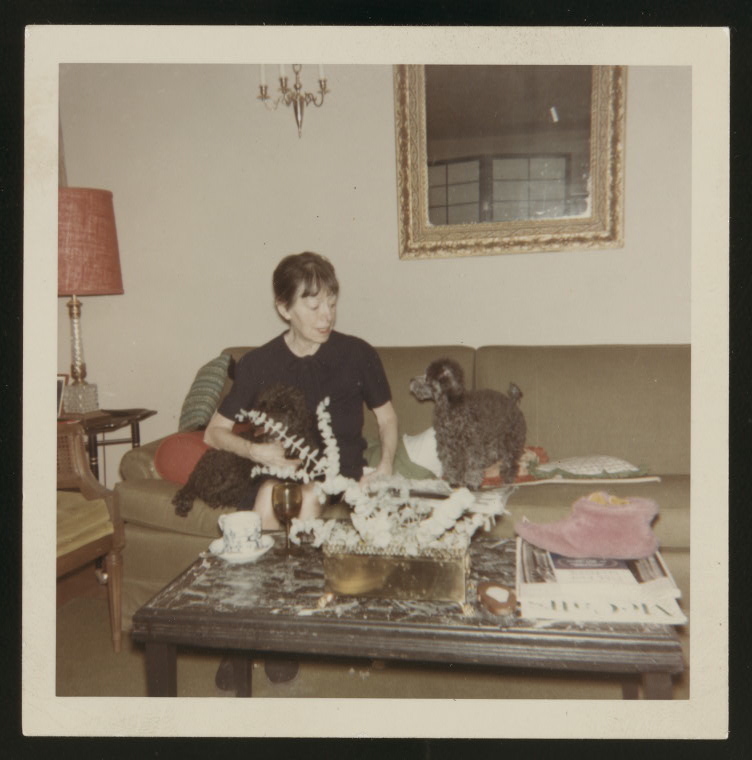 Photos of Dorothy Parker are not plentiful. There are perhaps 50 or so out in the public realm, in total. That seems odd in today’s Instagram-driven culture. But there are really not that many. So when a new one popped up on the New York Public Library Digital Archive in 2014, it was a revelation. It may also be the last photo of Mrs. Parker ever taken. She sat for several portraits over the decades, for such legendary photographers as Richard Avedon, George Platt Lynes, Roy Schatt, Edward Steichen, and Florence Vandamm. There are many newspaper and wire service photos of Mrs. Parker, coming and going on ships and airplanes, walking in picket lines, or in nightclubs. There is one photo not of Dorothy Parker that is continually used. There are no photos of her sitting at the Algonquin Round Table.

Let’s review the 2014 image and determine what we see in it. First, it appears to be a Polaroid. Were there color instant cameras back then? Since Mrs. Parker died on June 7, 1967, we need to narrow down the time range. Land, the company that invented the Polaroid instant film camera and process, was making color film when Mrs. Parker was in her 70s. In 1963, the same year she turned 70, the Polacolor pack film was brought out by Land. This made it possible to take instant color pictures. Is this an instant photo? It is square and looks it. But it also could be a square format film exposure from any commercial camera. This is the only color photo of Mrs. Parker, period.

Next is her life. After her husband, Alan Campbell, died in June 1963, she moved back to New York and into an apartment at the Volney Hotel in March 1964. Is this the New York apartment? Yes. The couch she is sitting on is different than the one taken in her West Hollywood home on her 70th birthday, with many bookcases filled with books on the wall; this apartment seems empty, like someone just moved in. The mirror reflects a wall, not windows, like the LA home. She also has two poodles with her. These are probably Cliché and Troisième (third in French; she shortened to Troy). It is known that when she died, she only had one dog with her, Troy. So this could mean the photo was taken after 1964. (Note in Marion Meade’s biography, the discrepancy that Cliché died in LA. I think she came back to New York with both dogs).

Our next clue is to look at what’s in front of her. That magazine is McCall’s, a publication she wrote for in 1928, including her famous essay “My Home Town.” Looking at the cover design, it matches covers from 1964-1966. There were issues when the cover photo came over the logo, but not this issue. It appears there is another magazine or book on top of it. Another clue that this is from 1964-1966 is there are not big stacks of books on her coffee table. In California, Mrs. Parker had stacks of unread books everywhere, because Esquire was sending her books to review. So this appears to be New York. However, there is still the chance this at a friend’s house and not her dogs.

Finally, there is a lot we don’t know from the photo. There is nothing to date it from a calendar or other publication, like a magazine. So the best bet is this was taken between age 70 and 73, around 1964-1966.

It would be nice if the New York Public Library published more data about the image. Who donated it to the library, who took it, did other photos come in from the same donation. That would answer many questions. But just like the other image restored in November 2019, now there is another photo of Dorothy Parker to see.

If you want to know more about Dorothy Parker, you could pick up my book A Journey Into Dorothy Parker’s New York, which has many of my rare images of her included.