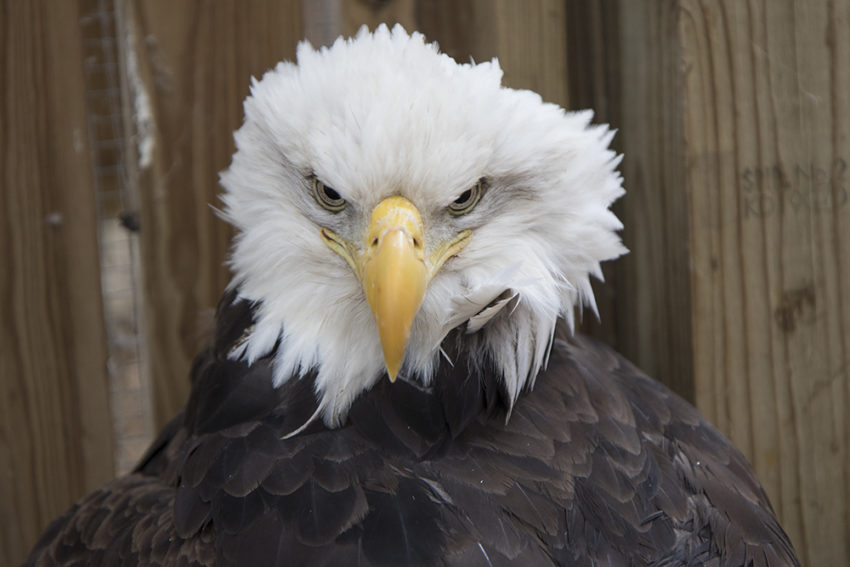 In late November a shotgun-toting schmuck took shots at an American Bald Eagle in rural Missouri. She was wounded in her leg and wing, coming down in a cornfield northwest of Granville, in Monroe County. Quick-thinking by the landowner drew agents from the Missouri Department of Conservation to rescue the bird. Although bald eagles are no longer listed as an endangered species, they are still protected by federal law, and shooting one is a serious crime, punishable by fines and jail time.

Conservation agents Haeley Eichler and Sean Ernst brought the eagle to a volunteer who rushed the wounded bird to the University of Missouri’s Raptor Rehabilitation Project in Columbia. There the eagle underwent emergency surgery to dig shot from its leg and put a pin in the wing broken by the gunshot. The program has a history of picking clever names for raptors in its care, and the beautiful bird was named Dorothy Parker.

Like her namesake, Dorothy Parker the bald eagle is a survivor of misfortune. Almost eight weeks after the incident, the expert care is healing the damage. “Dorothy continues to do well,” Tracey Berry, Director of Communications, University of Missouri College of Veterinary Medicine, wrote in a January 22 message. “We hope to repeat the radiographs on her broken wing next week to determine if she has healed to the point where we can remove the pin. If she has, she will have surgery to remove the pin and then be moved from her mews to a flight cage to begin her rehabilitation.”

Dorothy Parker ended up in the right place. Bald eagles are frequent patients at the Raptor Rehabilitation Project. The volunteers also have treated American kestrels, owls, red-tailed hawks, and vultures. Dorothy Parker, an adult female, is being monitored with the hope to eventually release her.

“As a general rule, rescued raptors must fly well enough to be able to hunt for food and escape prey before they can be released back into the wild,” says Berry. “If Dorothy can be released, we plan to have a public release as her case has generated a lot of interest.”

A lot of interest from the name. Where did that come from? A Missouri volunteer reading Dorothy Parker, of course. “The Raptor Rehabilitation Project volunteers and students name the birds by picking a theme each month,” says Berry. “Dorothy was brought in when they had chosen literary figures for whom to name the rescued birds…one of our community volunteers drove three hours to pick up Dorothy from where she was found injured and rescued and bring her to the University of Missouri for care, so the student asked this particular volunteer to pick her name. The volunteer is a fan of the poetry of Dorothy Parker and thus chose her for the tribute.”

The aim is to release Dorothy Parker back into the wild, which is not assured. The program says, “The Raptor Rehabilitation Project has a 36% release range. While this may not sound high, it is actually above the national release rate for raptor rehabilitation centers.”

What’s next? How can you help? In the spirit of the original Dorothy Parker, who supported numerous causes from civil rights to refugees, you can financially support the work of the Raptor Rehabilitation Project and its mission. To channel the poet and writer, you can make a gift online here. In the gift instruction box, please designate Raptor Rehabilitation Project.

But as the namesake New Yorker said, the two most beautiful words in the English language are “Cheque” and “Enclosed” — Make a check out to the University of Missouri and in the memo designate Raptor Rehabilitation Project.
Please mail the check to:
Attn: Kim Bussard,
Advancement Office
W210 College of Veterinary Medicine
Columbia, MO 65211

We hope to have an update soon on Dorothy Parker’s progress in rehabilitation, and if the culprit is nabbed.