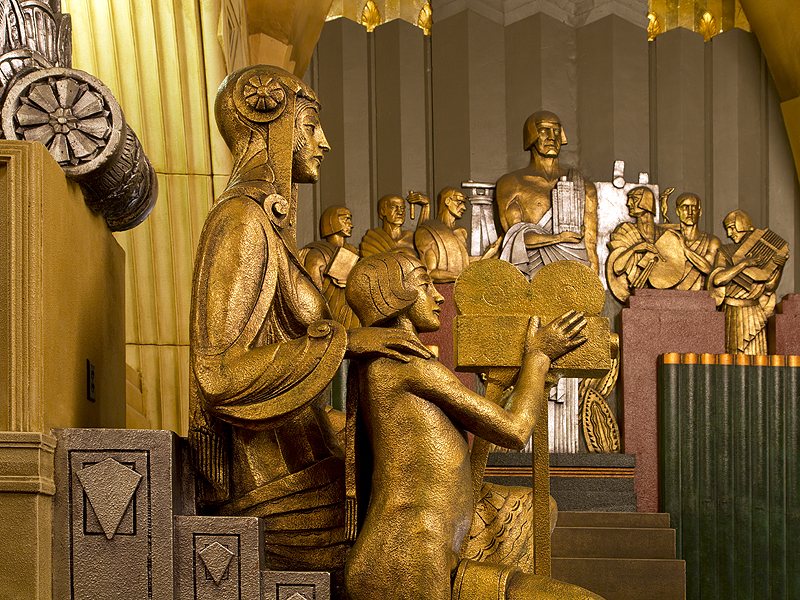 It is Hollywood awards show season, so this is the perfect time to uncover a long-lost Dorothy Parker book review about the town that she loathed so much. This incredible find is the review of the classic What Makes Sammy Run? written by Budd Schulberg. Parker wrote the review for PM, a left-leaning New York City newspaper of the 1940s.

It is a saying among publishers that books about Hollywood do not sell. It is, indeed, more than a saying: it is the God’s own truth. There is, I think, a reason. Almost every book about Hollywood has been a bad book, although not all of them have been badly written. And the trouble lies in the subject. For Hollywood, the place where they manufacture moving pictures, is as dull a domain as dots the globe.

It is a tight, dogged, humdrum industrial town, with no flashing incongruity to lift it into note: a Bridgeport without a circus, a Fall River without a Lizzie Borden. It is, to the sight, a stretch of made land peopled with the shrewd, the arrogant, the unlettered, the fearful and the defeated. There are also, as in every town, certain of the courageous, the gifted and the decent. But they are not conspicuously clustered.

Writers have looked at the place; they have searched neither under nor around it. They have asked no questions, and told many lies. Its surface dreariness seems to have overcome them, and they have sought escape in ingenuities.

Some of them tried to make Hollywood picturesque, and it became only monstrous. Some of them essayed to make it comical, and it turned idiotic. Some of them went in for toughness and cynicism about it, and proved to be merely dowdy of mind themselves. Some sobbed of its heart and its heartaches, and their books were trash before they ever reached the waste basket. Some did a little of all of these, heaven help them and us. Before today, one and all of them, as soon as they set down the word ‘Hollywood,’ let their honesty go hang.

But now there is an honest book about Hollywood. The curse on Hollywood books, I think, is lifted with the publication of Budd Schulberg’s fine novel, What Makes Sammy Run?

Certainly a fine novel should have more than honesty: that is only its first necessity. Mr. Schulberg’s book has more, and in abundance. It has understanding, pity, savagery, courage and sometimes a strange high beauty. It is written with a pace that washes you along with it and a sureness that comes only of great skill.

This is Mr. Schulberg’s first novel. It has been said that you should not let it matter to you if a book is its author’s first or his twentieth. But I think the fact that this is a first book is velvet to the reader. It is good to be present when such things happen. You feel the way you felt when John O’Hara’s Appointment at Samarra was published—proud and patriotic that another good novelist has come, and you are there to see his arrival.

There may be some uproar about What Makes Sammy Run? It is profoundly to be hoped that there will not be. Sammy Glick, born Shmelka Glickstein, the insupportable but unfortunately not incredible little rat of the title, is a Jew. There have been, of late, loud cries of “anti-Semitism” if a Jew is portrayed as anything short of the Holy Pattern of Perfection. Show him as even human, and you are accused of baiting his race.

It is notable that such protests, surely the ultimate in condescension, the sharpest affirmation of segregation, issue from those who need to proclaim their tolerance aloud. (Once I knew a woman who used to stamp her foot and shriek, “I hate intolerance! I won’t let intolerant people in my house!”) Those who hail us Jews as their brothers must allow us to have our villains, the same, alas, as any other race has—no different at all.

It is true that the Sammy of Mr. Schulberg’s book is a horrible little swine. It is also true that he is a Jew. He need not have been one, especially. Little Shmelka might have been little Enrico or little Wadislacz or little Mickey or little Heinie or little Johnny. He might have been any child taught by obscene poverty to fight for his wretched life and to hell with the rules.

I know Sammy Glick. I have met him in many places, some stranger than Hollywood, and under many names, most of them more elegant on the ear, but I know Sammy. And will you when you read him in Mr. Schulberg’s book.