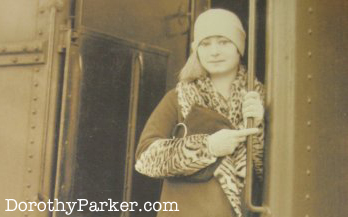 Due to the strange machinations of U.S. copyright law, on January 1, 2020, more works of art, film, music, poetry, and writing will enter the public domain. This milestone will bring out work published in 1924 that copyrights have been lifted. Dorothy Parker makes the list with a few gems published 96 years ago, including one of her most-quoted poems and an extremely unsettling short story.

Parker published 15 poems and free verse in 1924 that are now able to be used without paying her estate, which is controlled by the NAACP. The most famous of these is “Ballade at Thirty-Five,” which she actually composed when she was 30 and sold to Life for a June issue:

This, no song of an ingénue,
This, no ballad of innocence;
This, the rhyme of a lady who
Followed ever her natural bents.
This, a solo of sapience,
This, a chantey of sophistry,
This, the sum of experiments, —
I loved them until they loved me.

Decked in garments of sable hue,
Daubed with ashes of myriad Lents,
Wearing shower bouquets of rue,
Walk I ever in penitence.
Oft I roam, as my heart repents,
Through God’s acre of memory,
Marking stones, in my reverence,
“I loved them until they loved me.”

Pictures pass me in long review,–
Marching columns of dead events.
I was tender, and, often, true;
Ever a prey to coincidence.
Always knew I the consequence;
Always saw what the end would be.
We’re as Nature has made us — hence
I loved them until they loved me.

L’ENVOI
Princes, never I’d give offense,
Won’t you think of me tenderly?
Here’s my strength and my weakness, gents, —
I loved them until they loved me.

A list of poems published in 1924 by Dorothy Parker:

In 1924 Parker published just one short story, “Mr. Durant,” for The American Mercury. This was the debut year of the magazine edited by H. L. Mencken and George Jean Nathan, published by Alfred A. Knopf. “Mr. Durant” was the fourth of fifty-one short fiction pieces in her writing career. It’s the story of a despicable man, a reprehensible scum who Parker paints a picture of with perfect acuity. She was 31 when it was published and she really gets inside the mind of a Jazz Age sociopath. What makes “Mr. Durant” so devastating is that even though it was written 96 years ago, Parker’s story is timeless, it could be set in 2020. For this reason it is right to be in the public domain, perhaps a filmmaker will turn it into a short, set in 2020, or a magazine will republish it.

One reason for the relatively low output of poems and short fiction by Parker in 1924 is that she was working on her first play. Her collaborator was upcoming playwright Elmer Rice. “Close Harmony” was a three-act family slice-of-life comedy that played for a month in December 1924 at the Gaiety Theater. It is mildly amusing today; in 2010 the Dorothy Parker Society held a successful staged reading of the play (see videos here). “Close Harmony” is now in the public domain.

Here’s a succinct overview of other work also entering the public domain: Buster Keaton movies Sherlock Jr. and The Navigator; George and Ira Gershwin’s musical Lady, Be Good! including “Fascinating Rhythm” and “Oh Lady, Be Good” as well as George’s “Rhapsody In Blue;” a preliminary version of Ernest Hemingway’s short story collection In Our Time; Eugene O’Neill’s drama Desire Under the Elms and the Marx Brothers’ comedy I’ll Say She Is; and Edward Hopper’s painting New York Pavements.

However, as much as this is good news for Parker fans, next year promises to be much better. That’s because it will be 1925’s turn, which was the debut of The New Yorker, and the entire first year will be out of copyright protection. It was also the debut year of Parker’s three most famous poems–published the same day on August 16– “News Item,” “Observation,” and “Resume.”