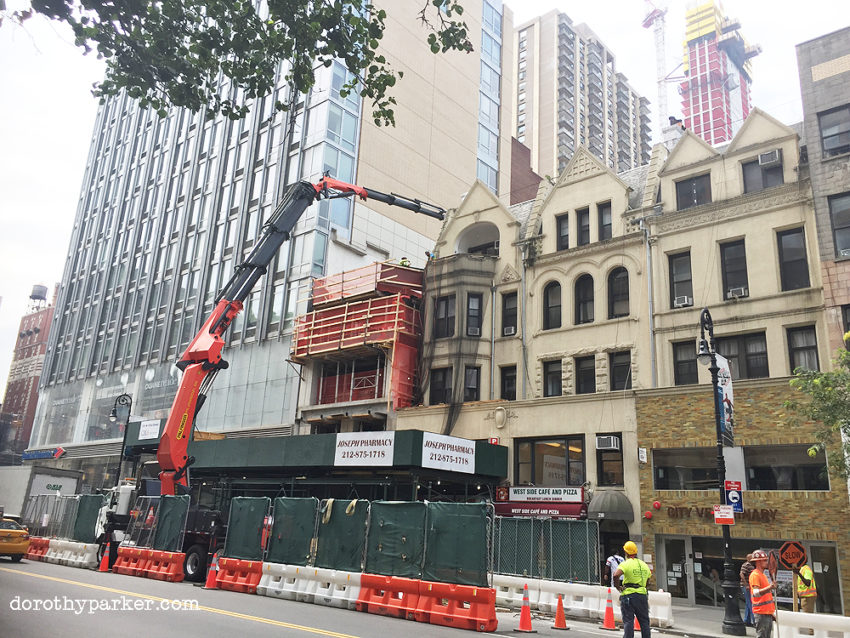 A porta potty stands in the spot where Dorothy Parker’s front door once was. The last childhood home young Dottie Rothschild shared with both parents—her mother Eliza Marston Rothschild died when she was just four—is today a construction zone at 214 West Seventy-second Street, on Manhattan’s Upper West Side. This was the Rothschild family home when Eliza died in 1898. The home was razed months ago and now construction is well underway to replace the five-story graystone walk-up building with an 18-floor luxury residence. All of this was well documented in 2011 when the local Community Board 7 rejected landmark appeals for the building by the Dorothy Parker Society.

The Community Board 7 Preservation Committee, Lenore Norman and Gabrielle Palitz, Co-Chairpersons, laughed, because they agreed with the building developer that Parker was only a child when she lived here, and never wrote any poetry or stories here. The developer’s attorney used this website and the book to back it up.

The building is on the edge of the historic district. It was not included in the plans when the landmark district boundaries were created, even though the three buildings to the west are all the same age.

We tried a letter writing campaign, which failed. I was in the Times. In the end, the developer won and we lost this literary landmark. While there are other apartments in Manhattan that Dorothy Parker resided, this was a special one, and its loss can never be replaced. If there is any consolation, perhaps the new building will be haunted.