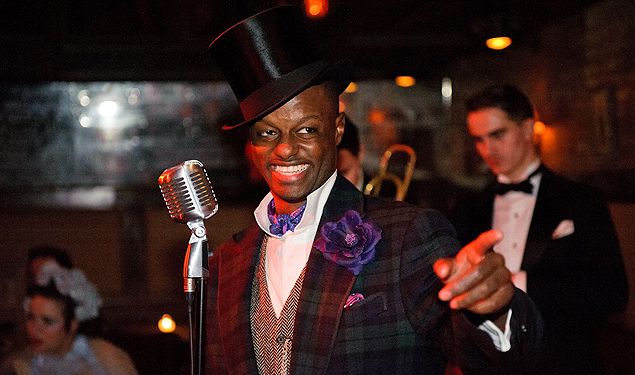 The Dorothy Parker Society has the monthly party that isn’t to be missed. This month it will be with one of our favorite entertainers. Wit’s End™ presents Dandy Wellington and His Band, at the 7th anniversary party at St. Cloud in the Knickerbocker Hotel, Saturday, Feb. 27, 2016. This is the fourth straight year that Dandy has performed at our anniversary party: He’s played February 2013, 2014, and 2015. Order Tickets Online Via Brown Paper Tickets

Tonight the party is in the Knickerbocker Hotel, opened in 1906 by the legendary John Jacob Astor IV on the corner of Forty-second Street and Broadway. In 2015, following a $225-million renovation, it reopened to glowing reviews. Wit’s End will be ensconced in St. Cloud—called “New York’s greatest rooftop lounge” with sweeping views of Times Square—sixteen stories above Broadway.

Also on the bill tonight is DJ Mike Will Cut You, New York’s vintage music DJ who plays classic sounds from 80-year old recordings. He is the host of “Ragged But Right” on WFMU Radio and performs at the Jazz Age Lawn Party. The hostess is glamorous showgirl Kita St. Cyr, channeling Mae West, Yma Sumac, and a dash of Lili St. Cyr. The co-sponsor of the party is the Dorothy Parker Society, the drinking club with a book problem.

About the Wit’s End Party:

Doors open at 8:00 pm. At 9:00 pm is a free dance lesson, taught by professional instructors Jeri Lynn Astra and Neal Groothuis. Learn classic steps such as Balboa and Lindy Hop that will be useful once the live music begins. The band begins at 10:00 pm.

Wit’s End serves cocktails made with fresh ingredients and premium spirits following the classic cocktail recipes of the Prohibition Era. St. Cloud will present a classic cocktail menu to transport you back to the speakeasy era, when guests such as F. Scott Fitzgerald and Florenz Ziegfeld were on the premises. Table service is available and reservations are highly recommended. After you buy tickets, email us to reserve a table at St. Cloud (first-come, first-served).

About the Wit’s End Pre-Party Dinner:

The pre-party dinner is served at Charlie Palmer at The Knick, on the 4th floor. The pre-fixe dinner menu is $45 for a delicious three-course meal. Wit’s End will have tables reserved beginning at 5:00 pm. (Cost of dinner is separate from the party admission). After you buy tickets, call 212-204-4983 to make a dinner reservation (singles are welcome).