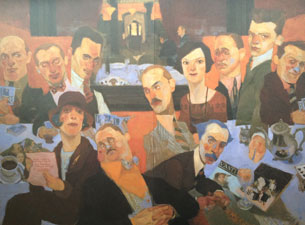 The next Algonquin Round Table Walking Tour will be on Saturday, Sept. 26, at noon. Advance tickets are onsale now, or buy them on the walk, $20 per person.

The tour is open to the public; it begins and ends at the landmark Algonquin Hotel, 59 West 44th Street. The tour encompasses the Theatre District, Rockefeller Center, Times Square and Hell’s Kitchen. Guests will see the former homes, haunts and hangouts of the Vicious Circle of the 1920s. See where The New Yorker began, visit the spots where the speakeasies once stood, and walk in the footsteps of the legendary wits.

Immediately following the walking tour guests have the option of having lunch at the Round Table in the hotel’s award-winning restaurant.