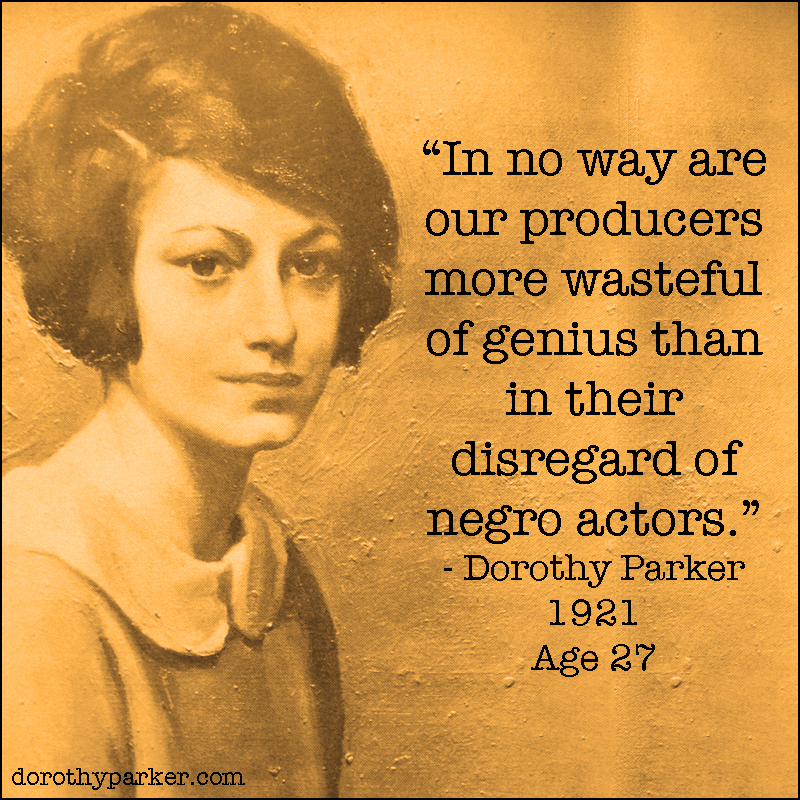 Today in the United States it is Martin Luther King Day, of course Dorothy Parker left her estate to him. This morning I created a little social media image, drawing on a line from a March 1921 review that appeared in Ainslee’s. Not long afterwards, I got an IM from someone, saying they “never heard of this one” and was I “sure it was by Dorothy Parker.”

Well, Jessica Fletcher, I suggest you read Dorothy Parker Complete Broadway, 1918-1923. It has 150,000 words by Mrs. Parker you’ve never seen. Here is the complete quote, in context. The review is about The Emperor Jones by some playwright named Eugene O’Neill (emphasis mine):

It is even more pleasant to see that The Emperor Jones has come to the Selwyn Theatre for a series of matinées, also. At the Provincetown Theatre, where it was playing, only about six people could behold it at one time, eight, when the standing room was filled. There is no use trying to add to what better men have already said in praise of Eugene O’Neill’s masterly study of terror of the supernatural, and of the superb performance of Charles Gilpin, a negro actor, in the title rôle. One can only hope that, when the run of The Emperor Jones is over, Mr. Gilpin will find other plays as well worthy of him. It took long years of effort and discouragement before he was given the opportunity of the O’Neill drama.

In no way are our producers more wasteful of genius than in their disregard of negro actors. What has become of Opal Cooper, who some seasons ago appeared with the Negro Players? Since that time, his opportunities have probably consisted of an offer to play one-fourth of a quartet in an uptown cabaret, and a chance to don a white cotton wig and say “Gord bless you, Marse Robert,” as an old family retainer in a heart-interest drama with its scene laid below the Thomas Dixon line.