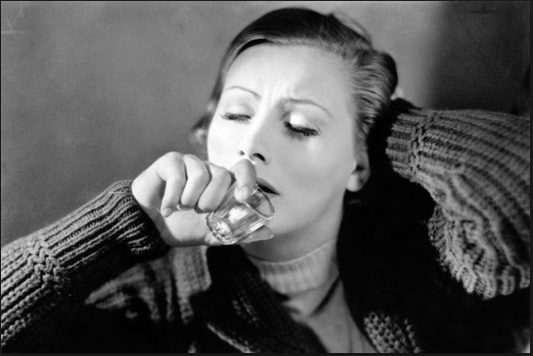 With the publication of The Algonquin Round Table New York: A Historical Guide (Lyons Press) on Jan. 6, I’m publishing more of my research files online. This interview with Dorothy Parker took place months before her marriage to Alan Campbell, and before she made her second attempt at Hollywood screenwriting in late 1934.

This story appeared in the New York World-Telegram on Sept. 15, 1932. The writer, Gunilla Wettergren, was a freelancer visiting from Sweden. In 1937 Wettergren published her book Livet Brusar (Life Roars) in Stockholm.

Dorothy Parker Went to Hollywood for Her Sins, But Escaped, She Tells Swedish Interviewer

But She Likes Greta Garbo, Without Having Seen Her on the Screen

Gunilla Wettergren, of Stockholm, writer of the following article, is a member of the staff of the Göteborgs Handels- och Sjöfartstidning, who worked her way to New York as a stewardess on the Kungsholm, sailing back today. She spent five days in New York as the guest of the International Federation of Business and Professional Women, of which she is an active member.

“I’ve never seen Greta Garbo on the screen and I loathe talkies,” Dorothy Parker told me today in her flat at the Lowell when I came to see her because of her enormous popularity in Sweden. Her prose and poetry are much translated in our country and she is the sort people talk about with admiration and curiosity.

“But I met her once,” Dorothy Parker went on, speaking of the Swedish star. “She was wearing a very simple hat and her hair swept carelessly down her cheeks, but she had the most adorable face. Otherwise I disliked intensely the crowd in Hollywood. I went there once, for my sins, to write stories for Metro-Goldwyn when the talkies were breaking in and there was much confusion about.”

“My contract went for three months, but after some weeks I ran away. I could not stand it more. I just sat in a cell-like office and did nothing. The life was expensive and the thousands of people I met were impossible. They never seem to behave naturally, as if all their money gave them a wonderful background they never could stop to marvel over. I would imagine Klondike like that. A place where people rush for gold.”

Smiling a trifle melancholically, Dorothy Parker hands over a packet of cigarettes. She is curled up in an easy chair, with a huge English sheepdog at her feet, a toy given to her by a friend to replace her dog, which is in a hospital. She is in navy blue and her black, whirling hair makes her look like a Japanese doll. She is vivid, witty and impulsive, but now and then she suddenly seems shy and helpless, and you would not be astonished if tears slipped out of her big brown eyes. Not by sentimentality, but by utter trembling sensitiveness. She is not like anybody else. She is exactly as you would imagine the Dorothy Parker that wrote “A Telephone Call” and “Big Blonde.”

“I am not writing any new poetry at the moment,” she answers to my question. “I am quite broke and poetry does not give you money enough to live on. But I am working on a new book of prose that will appear in January and I also write a lot for magazines.”

“It is so hard for me to get to work, so I have got a sort of duenna who comes every morning and sits four hours busying herself with some writing, I really don’t know what, to make me speed up and feel ashamed of myself when I incline to be lazy. I always have to work very hard and rewrite over and over again, especially the prose.”

“Do you feel that ‘Here Today’ at the Ethel Barrymore Theatre is inspired by your personality, as it has been suggested, and do you like it?” I asked her.

“The play is very good, but the character of the young girl is not altogether mine. There is only flippancy about it and I cannot quite agree I am like that. I think it hurts my feelings. It would be unjust to paint me all over in those colors. I have got other sides in my character, too.”

And smiling with her sad little Japanese doll-face, she promised to come over to Sweden some time to say how-do-you-do to all her admirers and learn how to ski.