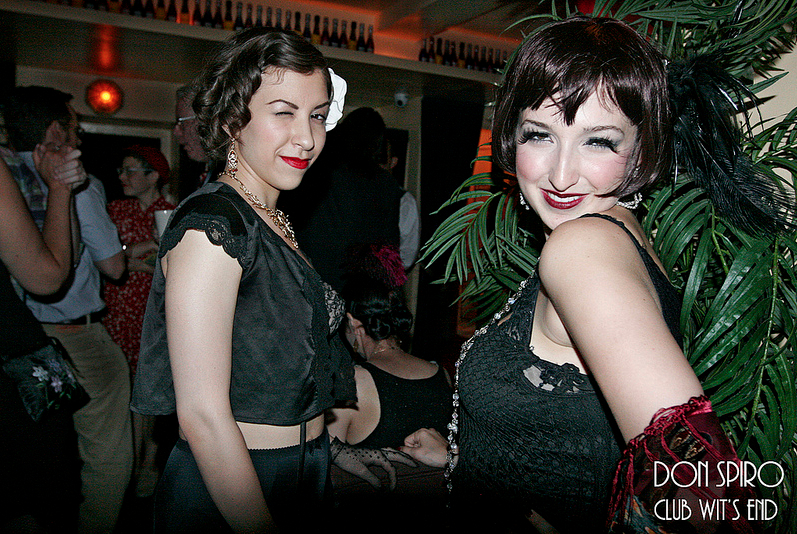 Parkerfest 2012 was a smashing success all due to the fact that all four unique events had a fantastic turnout. Spread over four days, August 22 to August 25, the Dorothy Parker Society was tickled to see so many old friends and new faces come to our events.

Since the DPS was launched in 1999 at the very first Parkerfest, we have been blessed with great events and fun times. We kicked off the 2012 edition on the anniversary of Dorothy Parker’s birthday at our first adventure in Brooklyn. We visited the New York Distilling Co., the home of Dorothy Parker American Gin. This was our second event there, and by far the best. We had the run of the place thanks to our gracious hosts, Allen Katz, Tom Potter, Bill Potter and Jason Grizzanti. The night started off with a tour of the distilling operation for a crowd of close to 50. Allen showed us how gin is distilled and gave us a full demonstration of the process, which even included some of us sticking our noses into the equipment to sniff the aroma of the gin-making scents.

We left the manufacturing and bottling operations with the knowledge of how Dorothy Parker American Gin is made. And then we drank it. Copious amounts. The bartenders delivered custom cocktails that were delicious on such a warm night. We toasted Mrs. Parker with drinks, and then got down to business: poetry. We were lucky to have DPS officer Emily Linstrom and writer Lisa Marie Basile, editor of Patasola Press, organizing things. We got two whiskey barrels rolled out (honestly, we did) for the readers to stand on, since there was no stage. It was fantastic. Anya Morlan and Gabriel Don read some Parker gems, and were followed by several other audience members. A highlight was the gentleman who read “Resume” from the screen of his iPhone.

The following evening, August 23, we headed to Mrs. Parker’s former stomping grounds, the Upper West Side, to the Arclight Theatre on West Seventy-First Street. We attended a brilliant performance written and starring Carol Lempert. The play “That Dorothy Parker” spanned the length of Mrs. Parker’s career and was wonderfully performed. The house was sold-out and there wasn’t an empty seat to be found in the 75-seat theatre. The audience was buzzing, and Carol held an impromptu talk back at the end of the show to answer audience questions.

On Saturday, August 25, the DPS had two double events that were huge hits. First was a walking tour of Dorothy Parker’s Upper West, detailed in the book from Roaring Forties Press. The walk took in homes and haunts from the West 70s to West 80s, with stops along the way. A bonus was having one of Mrs. Parker’s great nieces along for the walk. Susan gave us great family stories passed down from the Rothschild’s; it was a thrill to see her visit her grandparents’ apartment homes. Towards the end of the walk, composer Bill Zeffiro, who was one of the co-producers of “Close Harmony” at Parkerfest two years ago, performed a capella his original composition “Happy Birthday, Mrs. Parker.” What was amazing was he was singing in front of her old apartment house on West Eighty-Fifth Street.

Following the walking tour, we got dressed up for the big soiree of the weekend, the Wit’s End party at Flute Midtown. We had Bliss Blood, Cindy Ball and the Moonlighters back with us, plucking on their ukuleles and delighting us with 1920s and 1930s tunes. Co-Host Don Spiro set the tone in his bathrobe, as it was “Summer Scandals” night and many took off their eveningwear. The night was such a blast of good friends, music and dancing. Flute really goes all out, and this was our 14th year of having DPS parties with the old speakeasy feel.

We don’t know what Parkerfest 2013 will hold, but if it is anything like this years’ edition, do not miss it. Thanks to all who came out to celebrate Dorothy Parker’s birthday.