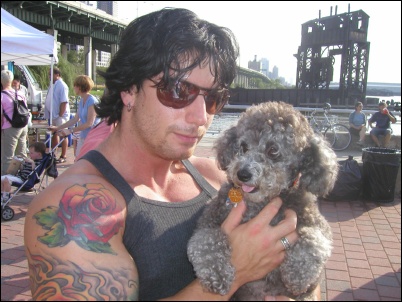 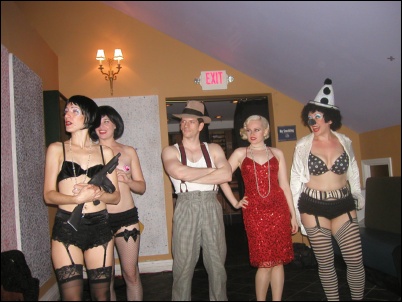 NEW YORK — Dorothy Parker fans young and old gathered in Manhattan for Parkerfest September 14th through 17th and participated in two “firsts” for the eighth annual festival: a burlesque show and a dog walk. The four-day affair was a big success.

The events, sponsored by the Dorothy Parker Society, were different from those held over past years, and new venues were added. The highlight was the annual Bathtub Gin Ball, held for the first time at the historic Woolworth Building on Lower Broadway.

The society also welcomed three special guests: the children of Mrs. Parker’s former caretakers came to New York, and shared their personal stories of family life with Dorothy Parker and Alan Campbell in Bucks County, Pennsylvania, where they lived at the Fox House Farm.

The DPS ventured downtown and held an event in the East Village for the first time. The place was Mo Pitkin’s House of Satisfaction, a bar and restaurant at 34 Avenue A, for the kick-off night, Thursday, Sept. 14. Stephanie Sellars, an actress-singer and longtime DPS member, helped organize a staged reading of Mrs. Parker’s work. Titled “The Potable Dorothy Parker” and co-produced with Celia Bressack, the cast included Sellars, Bressack, Jeannie Andresakes, Julie Reed, and Andy Horan. Among the selections performed were Just A Little One and Social Note. But the Parker material that seemed to be received best, and was had the crowd of fifty completely riveted, was the cast’s performance of The Lovely Leave – a short story that Mrs. Parker wrote after World War II. But in light of current events, the story could have just have been about a wife sending her husband off to Iraq, without changing any of Mrs. Parker’s words. The cast was excellent and the audience all enjoyed themselves.

Friday night, Sept. 15, the Algonquin Hotel played host to the annual happy hour party in the lobby. About twenty turned out for drinks and stories. Among those present were Helen Beer Wasmund of Virginia, Paul Beer and his wife, Sue, from Minnesota, and Jeff Beer from New Jersey. The three Beer siblings are the children of Hiram and Sissy Beer, who worked for Dorothy and her second husband, Alan Campbell, in the late 1930s and early 1940s in Pennsylvania. At the house tour the DPS held in July, Helen attended and spoke about her recollections of growing up on the farm, with Mrs. Parker nearby. For Parkerfest, she and her brothers told the group stories about their life in Bucks County and some of the humorous stories that the family tells about life with the famous lady of the manor.

Saturday, Sept. 16, was the big day for Parkerfest. In the afternoon the walking tour was held at the Algonquin Hotel. The group went to locations familiar to the Vicious Circle in Midtown, Broadway, Rockefeller Center, and Hell’s Kitchen. The weather was gorgeous and sunny as the Parker fans visited former theaters and speakeasies around the area. This was followed by lunch at the Round Table; the group was treated to Parker stories from the Beer family around the table.

In the evening the DPS held its annual party at the Woolworth Building, the world’s first skyscraper. And what a party it was!

The party was in an excellent location, the Woolworth Tower Kitchen, located on the ground floor of the landmark building. The attendees were attired in Roaring Twenties garb or formalwear. The music was provided by Aya Kato on piano. The cocktails flowed all night.

At midnight, the party moved to the VIP Room for a special performance by the Pinchbottom Burlesque Company. The co-directors, Nasty Canasta and Jonny Porkpie, produced a show that was straight out of the Prohibition era. The performers they brought to the show were some of New York’s best burlesque stars: Anita Cookie danced to the Helen Kane classic I Wanna Be Loved By You; the rakish White Boom Boom took it off to Zip Gun Bop by the Royal Crown Revue; special guest Little Brooklyn was a sexy clown inspired to act up to the Cab Calloway classic Minnie the Moocher; Nasty Canasta left jaws dropping to Fats Waller’s Ain’t Misbehavin’ – but what left everyone clapping was for Ruby Valentine and her classy fan dance, set to Midnight, the Stars, and You. The party then continued for some time in the bar area. A fantastic night.

Sunday, Sept. 17, was a beautiful day, sunny and warm. Perfect for a dog walk. It is well known that young Dorothy walked her dogs in Riverside Park as a child. So the DPS decided to re-trace her steps with our four-legged friends. We were helped in our efforts by the good people of Rational Animal, a non-profit organization the works to help abandoned and homeless animals. Because Dorothy Parker was such an animal lover, dog and cat owner, and advocate for helping others, the DPS decided to support this worthy group. The Rational Animal booth at the West Side Country Fair was where the dog walk kicked off, on the Riverside Park South pier. It was a blazing hot day, but quite a few turned out, such as Karen and her Chihuahua, Eli; Marie and her Chihuahuas Georgia, Peanut, and Pengus; Erica and her Yorkie, Ginger; and the very lovable poodles George Washington, Yankee Doodle, and Sam Adams, owned by Candice. Rational Animal set up a booth to take portraits, and they raised a few hundred dollars for their cause. We definitely want to organize another dog walk.

The DPS is looking forward to the next Parkerfest in 2007.