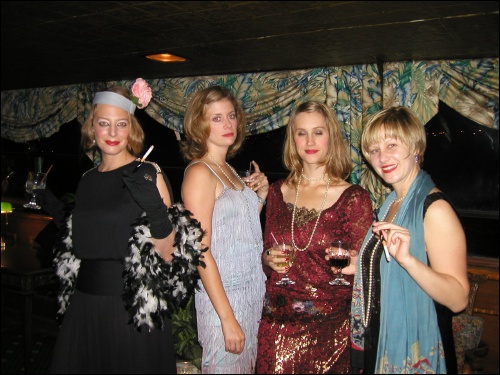 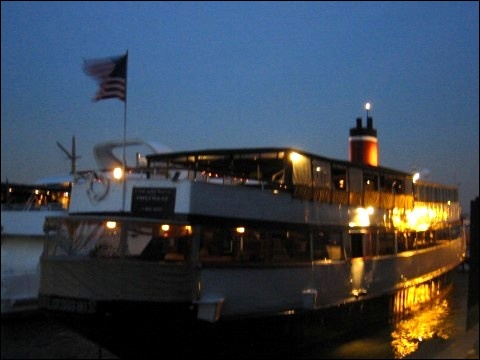 NEW YORK — For five years Parkerfest was held in August – timed to coincide with Dorothy Parker’s birthday – but in 2004 it was bumped back to October due to the Republican National Convention. It turned out to be a blessing in disguise. Attendance was double from 2003, new events were added, and the weather was beautiful.

The highlight of the weekend was the first-ever Dorothy Parker Bathtub Gin Ball & Speakeasy Cruise, held Oct. 1 aboard The Diplomat, a restored 1930 yacht. More than 115 boarded the boat for a 4-hour cruise (we got an extra free hour from the captain) around Manhattan, the Statue of Liberty and the beautiful city skyline. We estimated about 90-percent of the crowd arrived in 1920s costumes, from flappers to bootleggers. We also spotted Charles Lindbergh and Scott Fitzgerald at the bar.

The Diplomat was a marvelous place for the party. We had two decks and two bars going non-stop. The live entertainment didn’t disappoint anyone. Performing with singer Bliss Blood were Christopher Pistorino (upright bass), Aya Kato (piano), Tom Abbott (clarinet) and Sean Condron (banjo). Our special guest was Cindy Ball, aka Helen Kane, who taught the crowd what “boop-boop-be-do” really means. The music was fantastic and everyone danced to the sounds of authentic 1920s and ’30s jazz.

There were too many guests to mention here. But we did enjoy meeting: John De Marco, who is a Mel Torme singer and is performing at Helen’s on Eighth Avenue; Linda Amiel Burns from The Singing Experience and also runs the New York Sheet Music Society; singer Sara Jangfeldt, all the way from Stockholm, Sweden, who wrote and performs her own Parker show; the lovely Dana Scott Rae; Dave Quillen and his brother, the Southern Gentlemen in the pimp outfits; actress-poet Stephanie Sellars who had the greatest costume of the night on (right down to the garters); and speaking of garters, gorgeous Jemme Aldridge squirming in hers; the charming Cara O’Brien and her Weehawken leopard skin coat; cartoonist Dez Tayor, who came from London for the party and was looking for Batman on the skyline; the Associated Press star Ann Sommerlath and her new husband, jazz lover Ludwig Marek; from the New York Sun, the hardest working columnist in town, Gary Shapiro; raconteur DJ Edgerton of Wilton, CT; playwright Doug Dodson, who told us all about his amazing play he’s written about Aleck Woollcott; Sandi Durrell who is putting on Timeless Divas! Musical Stars of the Silver Screen at the Triad Theatre on West 72nd Street; Penguin Books’ Jessica Reed; Rick Morrison representing the F. Scott Fitzgerald Society; and many, many other fantastic people too numerous to list here.

A post-cruise “after party” was held at the Overlook Lounge. About two dozen cabbed up to the bar on East 44th for more cocktailing. This continued until daybreak!

Since the Parkerfest weekend was also the same time as the New Yorker Festival and New York is Book Country, we stretched the walking tours and had them on Friday, Saturday and Sunday. This year we debuted the Algonquin Round Table walks, and had a great turnout for all three days. Special thanks to writer Julie Farin and Word Smitten for bringing along free issues of the literary quarterly. The Algonquin Hotel staff was fantastic and accommodating for the lunch at the Round Table.

The informal consensus after the boat cruise is that many want to have Parkerfest 2005 on the same boat again. It was such a success, we think we’ll have to do it. And perhaps since the October date was such a good idea, continuing it.