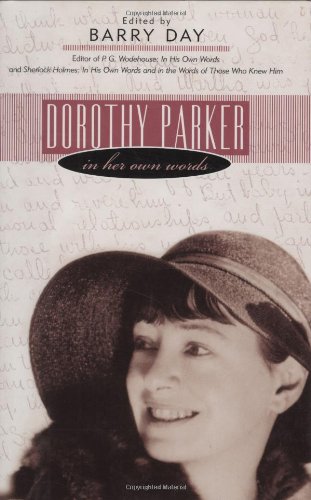 Barry Day’s new book Dorothy Parker in her Own Words is a biography that uses her original material to tell the story of her life. He talks about his book and Mrs. Parker in a Q&A for the Dorothy Parker Society of New York.

I see that you’ve written a play based on the Vicious Circle. Is that what led you to Dorothy Parker?

In fact, it was Dorothy Parker that led me to the play – not the other way round. I’d become so involved in her life and moved by her relationship with Robert Benchley that I imagined the two of them meeting up again in some celestial limbo after her death, reminiscing about old times good and bad . . . who’d done what and why . . . and whether things might have turned out differently.

I’ve always thought that Benchley was the lynch pin in her life – a rather wobbly lynch pin at times, to be sure – and after his relatively early departure from the scene she never really found anyone else to give her focus.

Anyway, that concept gave me the peg on which I could hang her recollections in retrospective tranquility.

How did you go about choosing the material of Mrs. Parker’s to include in the narrative?

The material virtually chose itself once I had determined a structure for the book. In general terms it would follow the chronology of her life but break off now and then to examine one or other of the linking themes of her life . . . Men versus Women . . . her preoccupation with death . . . her work as a critic . . . Hollywood . . . the growing concern with ‘politics’ of one kind or another . . . social mores . . . and, of course, the Round Table, which in a way embodied all of the above.

With that list of topics you then collect the material that seems to bring them to life ‘in her own words’ as far as possible.

The format you’ve chosen to tell her story is unique. Why do you think this works in biographies?

I chose this particular format because it had worked for me previously in similar books on Coward, Wilde and Wodehouse – all of them people who could play with words. In these books – and with Parker – I’m not attempting to write yet another conventional biography with a personal ‘take’ on the subject. I’ve tried to keep editorial comment to the minimum and, even if I’ve not succeeded entirely, I made a conscious effort. I wanted this to be a form of ‘autobiography’, so that you felt the subject was speaking to you. Even people who don’t write autobiographies leave sufficient clues that can be pieced together.

There have been three other Parker biographies. How is yours different and why should readers pick up your book?

The book is intended not for specialist and scholars – hence no pages of sources to weigh down the back of the book. I hope this is a readable book that will appeal to the more general audience that is intrigued to know more about this perpetually fascinating woman but is not interested enough to seek out everything she wrote (even if they can find it) or wade through a traditional biography.

There is a whole generation out there that has an interest in more and more varied subjects than any previous generation – thanks to the ubiquitous TV set – which also has an attention span conditioned by a lifetime’s exposure to that same medium. Which is not to say that this requires ‘Instant Parker’ but it does dictate that the subject should be made easily accessible and the book readable.

My hope is that people who read this book will feel they have met Dorothy Parker by the time they put it down and that at least some of them will want to go further and dig deeper.

Is there one particular section of her life that the books explores that is your favorite?

The section that interested me most was ‘The Sexes’. Whether one is a Parker fan or not, it’s impossible not to be impressed by the way she defined feminism in that confused and confusing post-World War I period. She gave voice to feelings that so many women had but couldn’t articulate and it’s because her perceptions were so instinctively accurate that she remains relevant to women (and men) today. She defined the issues and, even though she was a terrible role model herself when it came to following her own advice, at least it helped to have the playing field marked out for those who followed.

Without chaining herself to railings or leading demonstrations, I believe Dorothy Parker was one of the first true feminists. And she did it while remaining feminine. (But then, as a mere male, what do I know?)

Why do you think Mrs. Parker remains so popular almost 40 years after her death?

She remains significant because she remains relevant for the reasons I’ve already given. She remains – and will remain – popular because she expressed her convictions and complaints with a distinctive, self-deprecating wit. All great writers, I believe, provide you, among other things, with the ‘shock of recognition’. What they say to you is precisely what you thought and would have said if only you had found the words. You recognize the truth and in the case of the humorist, you enjoy the expression of it.

How do you think Mrs. Parker will ultimately be remembered by the masses, as a wit, poet, short story writer, or celebrity?

Dorothy Parker will live on in her work as long as people say – “I wish I’d said that”.

Yes, she has long since achieved celebrity status – but she will be remembered mostly for her funny and fearless way with words.

Is there anything you’ve learned about Mrs. Parker that you didn’t know before starting this book?

What did I learn about her that I didn’t know before?

Like so many I had been stopped short at the barrier of her wit and had been inclined to think of her as a superficial person. Anything but. She was very sensitive to people and their foibles, even though she was conspicuously ineffective in turning her insights to useful purpose in her own case. Her genuine involvement in social causes – such as racial integration – was also something I hadn’t realized about her.

By the time I’d completed the book I admired her every bit as much as I’d always done – but I liked her a lot better.

She considered her life a failure. For once she was wrong. But how much more might it have been, had Mr. Benchley lived . . .?