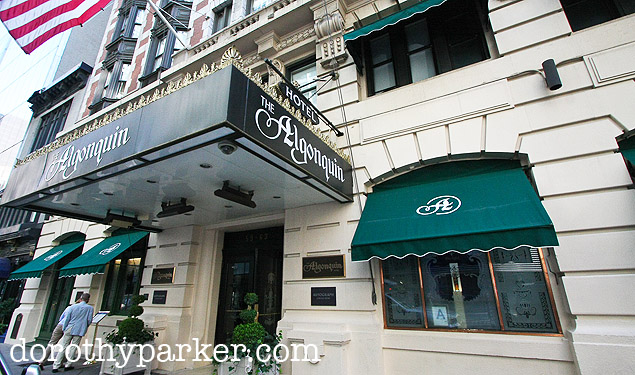 NEW YORK — If you’re judging the success of the fourth annual Parkerfest, maybe try this as the qualifier: None of the attendees from the Friday evening Speakeasy Night at Flute were able to drag themselves up to attend the 1 p.m. luncheon at the Algonquin Roundtable the next afternoon.

There was a familiar pattern: drink, talk, drink, talk… what a fine time.

Flute again played the gracious host to kick off the weekend. The former speakeasy on the edge of the Theatre District is perfectly suited to the needs of the Dorothy Parker Society of New York. It is dimly-lit, the drinks flow, and the atmosphere, to channel Mrs. Parker, so thick you could cut off a slice.

Parkerfest continued the next day at a rainy luncheon at the home of the Roundtable. Our hosts were of course the Gonk. We noted that the large painting of the Roundtable was missing. When the hotel changed hands earlier this year, apparently the painting went with the former owners. A new one is being painted.

The hotel was kind enough to open the second floor to us. We strolled through the library and Helen Hayes room. Both are filled with mementos to the Algonquin’s storied past. We took our time enjoying the literary atmosphere.

The walking tour was to follow, around the Upper West Side. However, the rains didn’t let up. Luckily for us, there was a nice dry bar around the corner, so we bagged the walking and kept up the drinking.

We are looking forward to the 2003 Parkerfest, which will be the Fifth Annual affair. We have discussed pushing it back to September, so keep an eye on this space for updates!