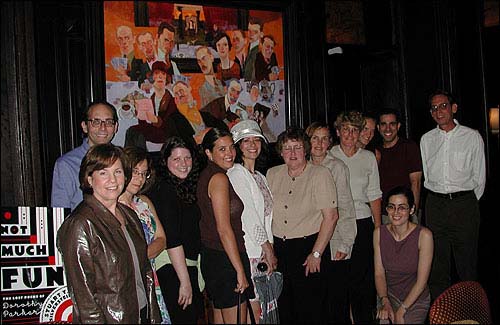 NEW YORK — The third annual Parkerfest retraced the footsteps of Dorothy Parker for three days, Aug. 10-12. We had surprise guests who made it extra special, and celebrated the life of the Algonquin Round Table’s greatest writer.

The highlight of the weekend was twofold. First, we were joined by Mrs. Parker’s great nieces. Susan, Nancy, Joan, and Jessie came from Upstate New York. They carried with them dozens of Mrs. Parker’s old letters, postcards and telegrams from their family collection. As we ate lunch at the Algonquin on Saturday, we pored over these amazing documents.

We were also joined by another out-of-towner, Stuart Y. Silverstein, the editor of “Not Much Fun: The Lost Poems of Dorothy Parker.” It just came out in paperback from Scribner’s, and Stu sat at the Round Table with us and answered questions about the book and Mrs. Parker.

As we did in 2000, Parkerfest began with a Speakeasy Night at Flute on Friday. Longtime visitors to the site know that Flute is formerly Club Intime, and Mrs. Parker and her pals used to frequent the place during the days of Prohibition. Many of the guests came in Roaring Twenties attire (or maybe a tie or hat!) and that made it seem more 1921 than 2001.

The champagne cocktails flowed — along with the sidecars, gin and lots of beer — as we tried to break the Parkerfest bar bill record. Thanks to Herve, Sean and Jenna for a fine time.

Saturday we returned to the Algonquin, which is of course Ground Zero for Parkerfest. The wonderful hotel staff (thanks, Karen Kincaid) threw out the red carpet for us. We got the Round Table Room, and round tables, for the Saturday afternoon luncheon.

We were joined by Mrs. Parker’s great nieces, who shared some great family stories that’ve been handed down over the years. They also brought photocopies of 95-year old postcards from young Dorothy to her father which the family treasures.

Stuart stayed and told us about the work that went into unearthing the 120 “lost” Parker gems. It was a lot of research. The results are of course a wonderful book and addition to every Parker fan’s bookshelf.

After the great lunch and chat session, we all headed upstairs to the Algonquin’s second floor. This is where the Round Table used to play poker, and also where the New Yorker was dreamed up. The hotel has an incredible collection of old books and photos from the old days, and we really liked getting a peek at them.

Sunday was the walking tour. It was so nice that the weather cooperated. We feared it would be 95 degrees, but it wasn’t even 80. The showers held off until we made it to the Plaza for drinks at the Oak Room.

The walking tour followed the familiar route of past Parkerfests, from Mrs. Parker’s childhood home on the Upper West Side, past landmarks and across Central Park. We had a small group and it was a relaxed pace. But by the time we got to the bar, all were thirsty.

We’ve already started planning Parkerfest 2002… and possibly something in December too. Parkerfest just keeps getting better each year.