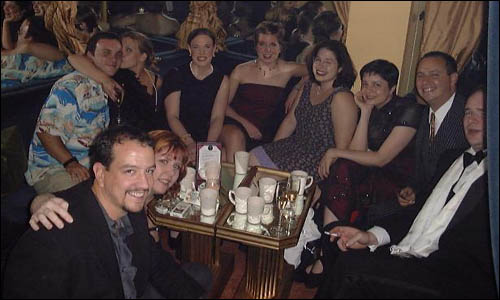 NEW YORK — The second annual Parkerfest was a two-day party where the members of the Dorothy Parker Society of New York toasted, talked, drank, smoked, laughed and walked around Dot City. It was a memorable weekend in New York, where we sailed into the Algonquin, The Plaza, Flute and paid our respects at Mrs. Parker’s former residences.

The highlight of the weekend was Saturday’s Round Table Luncheon in the Oak Room of the Algonquin Hotel. Four performers brought to life Mrs. Parker and the heyday of the literary coterie that resided there 80 years ago. It was a weekend of laughter and fun, and many new friendships were forged with fellow Parker fans.

We started Parkerfest 2000 on Friday night, Aug. 4, at Flute on West 54th Street. It’s the second year in a row we’ve made the place our unofficial headquarters. It of course used to Texas Guinan’s speakeasy in the 1920s and ’30s. So we all arrived in period attire. The champagne flowed, as did the Parisian Champagne Cocktails. We took over the place as the DJ spun classic Twenties music (later, we were dancing to “Pass the Dutchie” for some reason). Big Thanks to Herve Rousseau, the owner of Flute, and Adrian, the general manager, for making it such a special night. We had about 40 in attendance for Speakeasy Night!

It was tough to get up Saturday morning for the luncheon at the Gonk, but like true Round Tablers, most of us soldiered on. The Gonk was the place to be, and we rolled into the Oak Room for a great afternoon. We had a buffet spread, and then the fun started. We needed a “treasurer’s report” and Clark H. Madden did just that! He was Robert Benchley, it was uncanny. Clark came all the way from Pennsylvania for the weekend, and was a big hit. The “main event” triple showcase of song and drama followed Clark.

Lisa Daehlin sang five Parker songs, accompanied marvelously on piano by Tom Bayard. She sang “I Wished on the Moon,” from the film The Big Broadcast of 1936 and three songs with music by Seymour Barab and words by Dorothy Parker: “One Perfect Rose,” “Song of One of the Girls” and “Love Song.” She concluded with “How Am I to Know?” from the film Dynamite. Lisa got a big round of applause for her performance.

We switched gears to give the floor to our favorite Australian, Michele Stayner. She jetted in from down under for her 30-minute piece. It was a selection from Michele’s one-woman show Dorothy Parker Says, which had been performed in Australia. She ran through many of Mrs. Parker’s most famous quips, quotes and anecdotes, giving special attention to Diary of a New York Lady and her Vanity Fair articles. Michele flew around the Round Table and brought back the spirit of Dorothy Parker to the Oak Room. The crowd loved it!

We finished up the entertainment with four special songs delightfully sung by Amy Anderson, accompanied once more on piano by Tom Bayard. “Symptom Recital,” “Song of Perfect Propriety,” “Ultimatum” and “Inventory” all with music composed by Seymour Barab. Amy was terrific and everyone agreed having the Parker material performed was a unique experience.

We took a tour of the Gonk, led by the hotel’s Michael O’Reilly. He showed us the second floor, scene of where the New Yorker was founded and locale of many poker parties eight decades ago. It was a nice look around the Gonk and where the old poker games took place 80 years ago. As we took a staircase downstairs, some of us even crossed paths with the famous Algonquin house cat, Matilda.

We lost a few people in the Blue Bar, but most of us took off on the walking tour. We began at the former offices of The New Yorker on West 44th Street, then jumped on a city bus to take us to the Upper West Side. There we visited Mrs. Parker’s Girlhood Home at 214 W. 72nd Street; the Ansonia, Broadway & 74th Street; Mr. and Mrs. Parker’s First Apartment, W. 71st Street; her Pre-teen Home, 57 West 68th Street; The Dakota, One Central Park South, Central Park and The Plaza Hotel. We ended the tour in the Oak Room of the Plaza, sipping cocktails at a corner booth. It was a blast to be relaxing in the Plaza.

The weekend ended on a high note, settling a bar tab at the Plaza. We can’t wait to get together again.