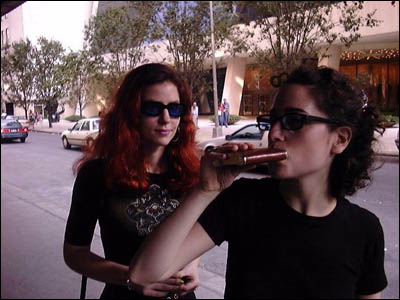 The first event put on by the Dorothy Parker Society of New York was a day that began with shoes and ended with sore feet.

Parkerfest was a daylong event held Aug. 28 in Manhattan. A combination walking tour, cocktail party and evening theater show, the event drew a terrific group of more than three dozen people from the metro area and beyond. Media coverage in the New York Observer, New York Press and L.A. Weekly helped.

The walking tour visited 13 spots that played a part in Dorothy Parker’s life. The group met at Riverside Park on the Upper West Side. The first stop was Dottie’s childhood home on West 72nd Street. It was the scene of the funniest moment of the day, and the tour was only 10 minutes along.

At the site at 214 W. 72nd, the group gathered on the sidewalk. The owner of the building came out to see what the commotion was about, and to see why 30 people were standing in front of his business, Original Shoes. As the group explained to him what was happening and who the former tenant was 99 years ago, he disappeared back into his store and came out with $10 coupons for everyone! Then he announced he would love to place a historical marker on the front of his building for Parker!

The group was in fine spirits as we walked to see the Ansonia Hotel, one of the most beautiful buildings in all of New York, and onto one of Parker’s former apartments. This was the second instance of the day of humorous coincidences. Outside the West 71st street brownstone, the owner came out to again see why a crowd was gathered on her doorstep on a quiet Saturday. She also had no idea that when she purchased the building five years ago it had such a history to it. “I’m glad,” she said, “the previous owners didn’t know about that or they would have raised the price.”

The next few stops were all on the Upper West Side: an apartment on West 68th Street, a walk around the corner to see The Dakota, and then a trek through Central Park. The weather was a little warm but otherwise it was a beautiful day for a long walk.

Exiting the Park, the Parkerfest moved to take a break at the Plaza Hotel. It was nearing the final leg of the walking tour and everyone was pretty beat. Along the way Amy Anderson, a talented singer and actress, had performed several Parker verse at different stops. But by now we all wanted one thing: drinks.

The tour made its way past the final locales in Dot City: Parker’s apartment where she lived with her first husband, the “21” club and the Algonquin Hotel. It was at the hotel that the tour ended and the cocktail hour got underway. The waiters were wonderful to take care of our tired group, and it was drinks all around for everyone.

By the early evening it was time for next stage of Parkerfest: a unique Off Off-Broadway play staged by two actresses who wrote their own Parker show. The group headed over to Hell’s Kitchen for Laughter and Hope and a Sock in the Eye, by Christine Hahn and Susanna Hobrath. It was wonderful. The Dorothy Parker Society handed out goodie bags to the group. Penguin Putnam Publishers donated books from their Parker catalogue and Harper Audio donated audio books of Parker stories. Christine and Susanna made Parker hand fans (much appreciated in the warm space). Very funny, the fans were printed with “I am a Dorothy Parker fan” on them. The show was terrific and we loved it.

Finally, it was time for the speakeasy tour. The tour was supposed to hit five nightspots. But when we all got to Flute on West 54th (formerly a speakeasy in the late 1920s), we were rooted there. All that walking had gotten to the group, and it was more like a nightcap than a night out!

In the end, a lot of new friendships were made and fun had by the Dorothy Parker fans gathered. We look forward to another event like it in the near future.