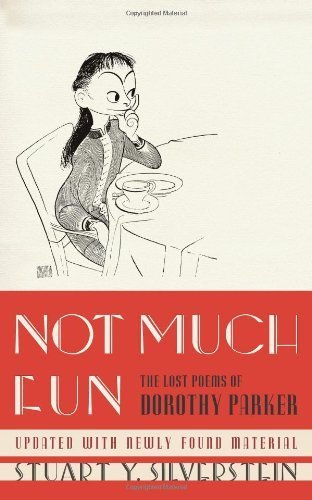 Writer-Researcher on Parker, her place in American letters, and the Algonquin Round Table

We have the good fortune to ask Ten Questions of Stuart Y. Silverstein. His 1996 book, Not Much Fun, The Lost Poems of Dorothy Parker, presented for the first time more than 120 poems not found in other Parker collections. The book is much-loved by Parker fans for giving us these “lost” gems. Silverstein researched and compiled the book, and wrote an excellent 60-page introductory biography. In July, the book is being released in the U.K. as The Uncollected Dorothy Parker by Duckworth Publishers. His next project is a book about the Round Table.

Why does Dorothy Parker’s popularity continue?

Two reasons: first, because wit stays in style; second, because she projects an attitude that a large swathe of the popular culture finds to be attractive, that is, sharp but vulnerable, cynical yet sentimental — street cred with an underlying heart.

Or, then again, maybe it’s something else.

What drew you to compile and research Not Much Fun?

It was an accident, really. I was going through microfilm copies of the old Life humor magazine to find Robert Benchley’s famous capsule reviews of Abie’s Irish Rose. Benchley was the magazine’s drama critic, and one of his responsibilities was to write a one- or two-line snippet for each play in production every week. Of course he hated “Abie” — it was, and is, smarmy nonsense — and of course it became the biggest and longest-running hit in Broadway history, at least until that time. Every week for five years (excepting summer breaks) he had to come up with something new, and some of his snippets have become part of that classic anecdotal heritage that surrounds most famous (or colorful) figures. [A side note: though in this case Harpo Marx came up with the best one-line review: “No worse than a bad cold.”]

The same few snippets have been repeated with monotonous regularity in source after source; I wanted to go through them all to get some new ones. While I was looking, I came across several Dorothy Parker poems — stuff I had never seen before — many of them beautifully illustrated by Charles Baskerville, who then was just starting out, and later was an eminent muralist and painter. (He died only a few years ago, at the age of ninety-eight.)

I had read that there were some uncollected poems, but to see them, particularly in such a natural, topical setting, had a strange effect. I started to compile them, and …

How long did Not Much Fun take you, and where did you begin?

As described just above, I started with the old Life microfilms, issue by issue. There were no indices, so there was no other way to find them all. Then I went through Vanity Fair and The New Yorker, which did have indices, which made that part of the job vastly easier, though in both instances there were pseudonymous pieces which had to be detected and disinterred. Then The Saturday Evening Post, with the same problem, and several other magazines.

Frank Adams’s Conning Tower, which appeared in the New York Tribune 1914-1921, and The (New York) World 1922-31, was particularly difficult, because it was a daily column, which meant there was a hell of a lot of it, and because it was unindexed, so I was compelled to check every (damned) one.

In all, the excavation consumed about eighteen months.

What led you to discover the plagiarism scandal with FPA?

Again, as described just above, I was forced to go through every column to check for poems; while I did not find any of those in any of the Tribune columns, that is, from 1914-21, I did find that little Adams nugget.

In retrospect I regret characterizing Dot as a “plagiarist”: after all, she only borrowed, or appropriated, one word. Unfortunately, that one word was unique, a neologism invented by the Chicago drama critic Percy Hammond; moreover, Hammond had invented it to describe particularly one cross-dressing vaudevillian — and Dottie borrowed it to describe the same performer. (The word, incidentally, was “ambisextrous.” It has not endured.)

Plagiarism is an amorphous thing, and the standard that applies can never be defined precisely; however, by any reasonable interpretation this instance probably was not sufficiently egregious to meet it. An appropriation should be vastly more comprehensive to reach that threshold, and God knows there is plenty of it around. I took my lead from Adams — his little rhyme on the subject was gratuitously vicious — and I regret it.

Adams was then a towering (sorry) figure in the minds of most of New York’s aspiring literati, and I cannot imagine how Dottie must have felt when she read his contemptuous dismissal. It is interesting that a few years later, after they met at the Round Table, he turned into perhaps her most passionate champion.

Why do you think Parker was dismissive of her early work as she got older?

Her earlier stuff does tend to be more ragged and breezy than her later product. When she started publishing her verses she was leading a hand-to-mouth existence. She lived from poem to poem; given the circumstances, of course she wrote as many poems as she could, without much discrimination in topic or tone, and some of the results might have caused her some consternation later on.

Why? Because by the mid-twenties she was established in the New York cultural world, and she was starting to view herself as a Serious Artist, and a Thinker. She marched for Sacco and Vanzetti, after all; how could she allow her artistic reputation be defined by rhyming puns about Sigmund Freud and the like? How?

Or maybe not. This is all speculative deduction based on what we know about her ambitions, attitudes, and manners. Or what we think we know. Trying to predict what others will think, or why they will act as they will, is dangerous business. Is this a reasonable interpretation? Sure. Is it correct? Who knows?

Do you think academia is dismissive of Parker?

The academic world traditionally has been suspicious of commercial success. It also has long held an unwarranted and grossly exaggerated respect for iconoclasm, particularly when waged from the political left. So academia tends to hold mixed feelings about Dottie.

What are the words and phrases Parker is credited with in the Oxford English Dictionary?

First, in virtually all instances the person credited with the first known use of a word/phrase almost certainly did not create it. Most words emerge from a hazy mist — suddenly, there they are, out of nowhere. That being said, the first documented use of the following words/terms/phrases can, for the time being, be attributed to Dot Parker:

art moderne
ball of fire (of a person)
with bells on
belly-acher
bird-brain
boy-meets-girl
chocolate bar
daisy chain (sexual meaning)
face-lift
high society
mess around (potter)
nostalgic
one-night-stand (sexual sense)
pain-in-the-neck (of a person)
pass (sexual overture)
not to have a prayer
queer (gay)
scaredy cat
shoot (expression)
the sky’s the limit
to twist one’s arm
what-the-hell (exp)
and, perhaps proving that there is indeed a God, one particular verb: to wisecrack.

Where should Parker rank in the 20th Century of American writers and poets?

Why is the Algonquin Round Table important?

The first lunch at what later was called the Round Table probably occurred eighty years ago this month, in June 1919. Yet the term “The Algonquin Round Table” still holds substantial cultural resonance; for example, during the past television season at least three sitcoms employed it as an ironic punchline to skewer characters who spoke badly or stupidly. Is there any other person, or institution, or event from the interwar period that could possibly be used by a mass-market medium as an implicitly understood cultural reference? I cannot think of any — not even Lindbergh, not any more. Perhaps the Stock Market crash.

Endurance is its own testament. Ultimately, the Round Table was just a parochial literary coterie, yet somehow it has survived in the mass public consciousness for more than three-quarters of a century. That is very important. Or at least it is very interesting.

The truly ironic element here — Pretension Alert! Did I just write “truly ironic element”? — is that when the lunches started, the Table owed its wide public notice to the reflected fame of some of its more celebrated members, most notably the newspaper columnists Frank Adams and Heywood Broun, and the flamboyant critic Alexander Woollcott. Within a few years, two other original members, among others, gained wide public notice: Marc Connelly wrote what was thought at the time to be one of the great plays of the century, The Green Pastures; Robert Sherwood was the most honored playwright of his generation, winning a succession of drama Pulitzers and Oscars. Five ostensible heavyweights — yet all of them lapsed into permanent obscurity.

What is your favorite Parker story, verse and quote?

Story: deflating pretension is always a useful exercise; when Dottie came upon an American actor whose season on the London boards had caused him to go native — he had a busy “shedule” — she said: “If you don’t mind my saying so, I think you’re full of skit.” (Another version has Dot filleting the English actor Herbert Marshall, but absent the pretentious element — an Englishman has every right and even duty to sound English — Dot’s rejoinder becomes pointless abuse, and the story makes no sense.)

Quote: “Listen. I can’t even get my dog to stay down. Do I look to you like someone who could overthrow the government?”